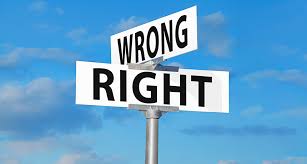 There’s a song I used to love from one of my favourite Christian artists, Randy Stonehill, called “Stop The World” (wow, showing my age, here!).

It is a satirical picture of how the morals and ideals of the world are so upside-down and hypocritical, and he was right on the money.

Unfortunately, this sad reality has crept into some churches as well, and it is now considered right to be wrong.

Well it’s okay to murder babies, but we really ought to save the whales
We’re putting criminals in office ’cause it’s way too crowded in the jails
T.V. is our teacher now, the schools are overrun by thugs
And children skip their innocence, and graduate to sex and drugs
Right is wrong and wrong is right
White is black and black is white
I think I just lost my appetite
Stop the world, I wanna get off

We read stuff like this, shrug our shoulders, and say ‘yep, that about sums it all up!’.
We expect warped logic of this magnitude from the world – after all, at the end of the day it’s just heathens behaving like heathens – everyone pushing his or her agenda at the expense of everyone else.

But at God’s church as well? Come on, surely that wouldn’t be tolerated? With God there is only black and white, and no indifference would be accepted, right?

Wrong, unfortunately. Sadly, in some fellowships it is the norm.

Why is this happening?

Well, I could launch into a great biblical debate to prove my point.
Or I could cite numerous theological commentators from ages past to back my claims.

But in the end I believe it all comes down to one thing:
THE SIN OF PRIDE: What I want is more important than what God wants.

After all, why else would some fellowships embrace a gay person, and condone their lifestyle, when the bible states that all sexual idolaters will be thrown into a lake of fire (Rev 21:8)? How cruel is that?

Why would some sit in their pews and say nothing while listening to “Pastors” exchange sound biblical exegesis, with unbiblical cherry-picked ‘life-lessons’? To send people to hell with a balanced cheque-book, a sexually-fulfilled marriage, and a full stomach? Again, how cruel is that?

The answer: we have become tolerant people-pleasers.
We would rather cave to the pressure from the world to comply with them, than honour and worship our Creator. All because we want the world to like us. And if the world likes us, we may be able to change them, win them over.
But who is really being changed – us or them?

More and more churches and denominations are ‘coming out’ as gay-affirming, and it’s not because their leaders have combed the scriptures and determined God’s position on the matter. It’s because the world has pointed the finger at the church and branded us as ‘homophobes’, and rather than offer the other cheek, some would rather bend to them and embrace the lie of “God created me that way” – all in the name of tolerance.
The result: homosexuals never hear the true gospel and end up in hell.

More and more churches and denominations are filled with congregants who want to hear life-enhancement tips, and it’s not because their leaders are applying proper biblical hermeneutic techniques to draw God’s reasoning behind the text.
It’s because the Pastor is so scared he will lose his congregants – for they were first lured to church under the false pretense of ‘what God can do for me’, and to now tell them they are sinners would offend them and drive them away.
The result: the gospel is never preached, and ‘Seekers’ end up in hell.

Pride is the original sin.
When one of the angels desired to be as good as God, he was kicked out of heaven, along with his accomplices, a whole third of the total. Why? Because he wanted to be equal with God.

When he then successfully tempted Eve to eat of the forbidden fruit, sin entered the human race. Why? Because he convinced her that she will know as much as God.

The Bible is swamped full of tragedies that follow when people give in to the sin of pride. Just follow the stories of Cain, Saul, David, Peter, Judas, Annanias & Sapphira for example, and you will find where pride tripped them up.

They are examples of what happens when:

If there was a root of sin, it would be pride. Not that God measures sin by degree, but I’m sure if He did, pride would top the list – its’ expanse is pandemic, it’s legacy tragic.

So what is the consequence of bowing to the world, instead of God?
Well, we soon find that our conscience has dulled somewhat, and we can’t challenge it anymore; the things we once held as concrete black or white, have morphed into a muddied grey jelly. And when we exchange God’s perfect morals for our own fallible standards, His glory disappears. What we have effectively done is kick God off the throne.

God’s morals are objective, mans’ subjective. And if anyone challenges ours, pride prevents us from bending from them. We find that regardless of reality, our perception is the correct rendering. Arrogance defines us; it doesn’t matter anymore that what we think is contrary to God’s Word. No amount of ‘thou shalt’ or ‘thou shalt nots’ will move us. White can be black, and black can be white. Right can be wrong, and wrong can be right. We have become wise, but only in our own eyes (Is 5:21).

In catering to the world, we have in fact become no different from the world. The church has become just another club or meeting place where homosexuals and spiritual seekers can gather and feel safe and included. Nothing wrong with that, apart from the fact that their lifestyles are condoned, their views embraced, in order that they will both like us, and keep our numbers up.

And when someone outside the fraternity finally confronts them of their sins, their church stands alongside them with the world and their pitchforks and their placards, joining in the chorus of shame –  ‘Homophobe!’, ‘Hater!’, ‘Literalist!’.

And tragically, when they die and stand before God on judgement day, He will give them the punishment they deserve; all because their leaders were too prideful and gutless to confront them of their sin, and let the glorious gospel do it’s work in them through repentance.


At times I wonder about these churches – is it a case of are they are led by a true born-again pastor who has been deceived through the sin of pride, and whose conscience has been seared almost beyond recognition?
Or is the leader an unregenerate sinner infiltrating our sacred institution – masquerading as a believer and pushing a worldly morality; hiding behind the facade of ‘how could God be so loving, and not accept everyone, including their beliefs or persuasion’?

You can look at some and say yep, that’s definitely the earlier, or the latter, and some you honestly can’t tell.
But I do know this: the cure is the same for all three – THE GOSPEL.

Hang on, before you dismiss this as too simplistic, let me expand:

When Christ died and washed away your sin, which of the sins were included in the transaction? Just the ones you could remember and repent of? Just the ones you had committed prior and up to that moment? Just the bad ones? NO!
The gospel is the ultimate leveller, the all-round antidote that can cure the vilest residue of the stain and disease of ALL sin. To think otherwise is to negate the salvific power of His death and resurrection. His sacrifice was a ONCE only transaction. That means whatever sin you have committed, and will later commit, He has paid the price for.
As I mentioned earlier, sin is a sin, and not measured by degree, so the same Jesus that died to save you from the sin of lust (adultery of the heart, Matt 5:28-29), also saved you from the sin of lying, blasphemy, and the other 7 commandments.
The point I am making is this: the same Jesus that died so that the homosexual sitting in the pew could repent and be saved of his sin of lust, also died for the person in the pulpit filled with pride condoning his lifestyle. The same Jesus that gave His life for the unrepentant seeker looking for life tips, also gave His life for the one withholding the gospel from him. That same Jesus also surrendered His body for whatever sin I am holding onto, also died for that sin you are holding on to.
Christ had no favourites, (people or sin) when He hung on the cross. He died for all. There is no sin so vile that his blood cannot wash away. There is no sinner so filthy He cannot cleanse.
So, let this be a lesson for us all – that God is Holy, and hates sin.
He HATES it!
So we should pray and plead for those church leaders who shake their fist at God and go against His commandments, to soften their hearts and repent of the sin of pride.
We should pray also for those under them, that somehow through the false teaching that a glimmer of the light of the gospel will bring them to repentance.
And most importantly, we should remove the log from our own eye, and pray and repent from our own trespasses as well, lest we stumble and become so pious and prideful ourselves.
Blessings.

The Camel That Broke The Straw Man’s Back