The Cowboys vs the Indians. The Cops vs The Robbers. The Federation vs The Dark Side.

That’s how we all view our daily struggle for existence this mad world of ours – our thinking being that the harder we try to subdue the bad with our goodness, the better chance there is that good will eventually prevail.

But unfortunately that doesn’t work with our personal character and God.
One of the most confusing paradoxes in Christianity is that the harder you try to be good in order to get to heaven, the less chance you have of making it there.
How does that work? Why are the scales of justice rendered useless when it comes to the ultimate judgement of our lives?

Well, to answer that, I want you to take a long hard look in the mirror and tell me – is the person you see looking back at you really as good as you say they are? Have they done everything they possibly could to be considered good? Enough to guarantee automatic entry to heaven when they die?

How many lies would you have told in your life?
One? A few little white ones? Thousands? Be honest.
OK, what do you call someone who tells lies? If I told you a lie, what would you call me?

Have you ever taken something that doesn’t belong to you, regardless of how long ago and how small the value?
Have you copied or downloaded something from the internet that you didn’t pay for?

What do you call someone who steals things? What would you call me if I took something of yours without asking? Remember the first question, then answer properly!

Have you ever looked at someone and had sexual thoughts about them?
Jesus said ‘whoever looks with lust has already committed adultery in their heart’ (Matt 5:28).

OK, if you have been completely honest, then I’m guessing that you have answered yes to all the above questions. That would make you a lying thief and an adulterer at heart…and that’s only 3 of the 10 commandments!

Now picture yourself standing before God on Judgement Day. Would He find you innocent or guilty of breaking His commanments?
Based on this, would he let you into heaven, or throw you into hell?
I’m picking the latter, because I don’t know anyone who has kept the law perfectly: ‘For all have sinned and fallen short of God’s glory’ (Romans 3:23).

That’s the problem with trying to keep up Godly standards – we need to keep them perfectly, or face eternal damnation – good luck with that. ‘For whoever shall keep the whole law, and yet stumble in one point, he is guilty of all.’ (James 2:10).

But isn’t that a bit unfair?’ I hear you ask.  ‘Surely keeping 99.99%, or even more than 50%, is good enough to tip the scales in my favour?
God is so good and so righteous, that He expects everyone to meet this standard. After all, we would not expect Him to tolerate unrighteous people in His presence in heaven, would we? Since He is a good judge, we would expect all who fall short of His perfect righteousness to be punished. And this punishment is eternal separation from Him in a lake of fire. Does this concern you? It should!

God, in His mercy and love, came to earth in the form of a Man, born of a virgin, making Him fully God, fully human. He had done no wrong, fulfilled His Father’s law to perfection. 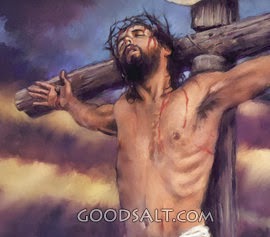 He gave up His life as a sacrifice to save mankind from God’s wrath. After 3 days in the ground God raised Him up from the dead.

Why did He do that?

‘For scarcely for a righteous man will one die; yet perhaps for a good man someone would even
dare to die.
But God demonstrates His own love toward us, in that while we were still sinners, Christ died for us.
Much more then, having now been justified by His blood, we shall be saved from wrath through Him.
For if when we were enemies we were reconciled to God through the death of His Son, much more, having been reconciled, we shall be saved by His life.’ (Romans 5:7-10)

‘For scarcely for a righteous man will one die; (v7)
Would God bother offering up the life of His only Son for a perfectly righteous man?
Scarcely. Why?
Because a righteous man doesn’t need saving. He has done nothing wrong. He has kept the law to perfection. There is no condemnation owing to Him.

So He would scarcely (or hardly) bother die to save him.

Jesus confirmed this when He said ‘Those who are well have no need of a physician, but those who are sick. I have not come to call the righteous, but sinners, to repentance.”‘ (Luke 5:31-32).

When we say that we are righteous, we are in fact saying we are so good we don’t need Jesus. This is called self-righteousness. So Jesus doesn’t need to die for you. You are prepared for your righteousness to count for your sins. Good luck if that’s you!

‘yet perhaps for a good man someone would even dare to die; (v8)
But would He dare to give His life for a good man?
Perhaps. Why?
The good man is not a righteous one. Although he strives to be good, he falls short constantly. He is imperfect. He therefore has a reason to die, so Christ’s justification in taking his place would be valid.

The good man is is a picture of us. We have strived to reach righteousness and failed, therefore deserve being tried and convicted for falling short of perfection.


But we have hope in Christ:

But God demonstrates His own love toward us, in that while we were still sinners, Christ died for us.(v9)
Christ came to save good people. Those are the ones who strive to be righteous, but fall short.
They have no hope. God gave up His Son to save those people. If you are living and breathing, that’s you.


For if when we were enemies we were reconciled to God through the death of His Son, much more, having been reconciled, we shall be saved by His life. (v10)
If you have truly repented of your sinning (trying to be godly by your standards), and accepted Christ’s sacrifice on your behalf, then your sentence can be quashed by God.
And when you stand before Him on judgement day, when He looks at you, He will see Christ’s righteousness, not our own. He will say ‘Case dismissed. Well done, good and faithful servant, enter into the joy of the Lord’.


We look at God and say ‘do more, work harder to please Him!’.
God looks at His Perfect Son and says ‘it is done!’.

We could do no more than be clothed with His righteousness:
‘I will greatly rejoice in the Lord, My soul shall be joyful in my God; For He has clothed me with the garments of salvation, He has covered me with the robe of righteousness, As a bridegroom decks himself with ornaments, And as a bride adorns herself with her jewels.’ (Is 61:10).

Please do not go to sleep tonight without putting things right with God. The alternative does not bear thinking about!

James 4:1-10: The Test of Worldly Indulgence

Of Mongrels And Prodigals