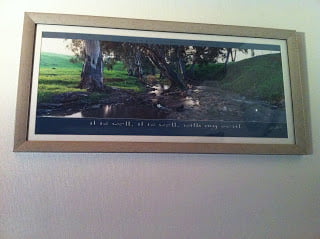 When peace like a river attendeth my way;
When sorrows like sea billows roll –
Whate’er my lot, Thou hast taught me to say
“It is well, it is well with my soul!”

Thus say the words of a famous old hymn written by Horatio Spafford.

And thus say the words of a picture that hangs on the wall of my lounge. 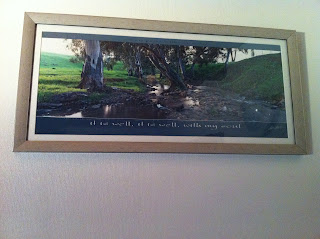 My sister Pat & I bought this picture for my father on his 80th Birthday in 2006.
We were stuck for gift ideas, but when we saw this hanging on the wall of the Christian gift store, we both looked at each other and nodded. It seemed to portray him to a tee.

He seemed to me to be unflappable – when things were in turmoil around him, he was calmness personified. And when things turned to custard, he would shrug his shoulders, accept his ‘lot’, and move on.

Deep down, Dad had a faith that was unshakeable – because he knew that whatever misfortune came his way, nothing could rob him of the security he had in Christ.

“And we know that all things work together for good to those who love God, to those who are called according to His purpose. For whom He foreknew, He also predestined to be conformed to the image of His Son, that He might be the firstborn among many.” Romans 8:28-29.

The Depression, the rejection of loved ones, a World War, marriage, children, granchildren, death of a spouse, re-marriage, death of a child, new great granchildren, a stroke, great-great grandchildren, Dimentia, death of his second wife, and ultimately his own death – these are all part of the tapestry that was Laurence John Godfrey.

So what gave him the strength to endure the bad as well as the good? – the assurance of the Holy Spirit that God planted in his heart when he repented of his sins in the early 70’s.
From that day onwards he knew everything he endured was actually God-orchestrated, shaping him, conforming him to His image.

And exactly one year ago today, the 20th of November 2011, God finally finished His work. On that day Dad got to see Jesus face to face, and his sanctification was complete.

Even death is not a stumbling block for those that love God. O death, where is thy sting?

…it is just another step on the pathway to the arms of Christ.

Whom Shall I Fear?

In Remembrance…My Heart Is Broken, Too

Wellington’s Not For Me