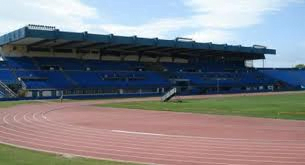 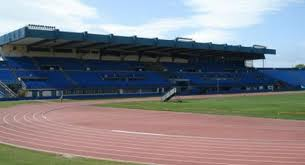 Queen Elizabeth II Stadium in Christchurch was state-of-the-art when completed in 1973 for the Xth British Commonwealth Games the following year.


It was an all-in-one facility, staging all track and field sports for the Games, as well as all the pool competitions.

I visited the site of stadium in January 2013, after the Canterbury earthquakes, to find a pile of rubble…

So why is this any more significant to me than any other buidling in Christchurch?

I was 10 years old, in class at Glenmoor Primary School in Christchurch, when my teacher excitedly waved a piece of paper.

We knew that the Commonwealth Games were being held here next year. My teacher was explaining how exciting it was to have it in our own city. It only came around every four years, and this was only the second time it had been held in New Zealand in it’s 44-year history.

Well, it turned out that they were looking for school children in the Canterbury region to participate in the opening ceremony. As you can imagine, my hand shot up straight away, without even hearing the details!

Fast-forward to Thursday 24 January 1974. While all other school children where enjoying their summer break, myself and a few others from my school jumped on a bus and headed to the brand new stadium. I learnt later that the stadium logo was designed by one of my Le Fevre cousins!

It was a hot Christchurch summers day, and there were thousands of people milling around, and everyone was so excited!

A team of people escorted about 20 bus loads of us kids into the stadium and to our selected seats in the stands.

It seemed like forever we were sitting there. Then the music started, and we all jumped up and paid attention. The ceremony had begun! There was an official powhiri, people gave speeches, and there were lots of parades, pipe bands, displays and singing.
There were no pyrotechnics or laser shows back then – the whole ceremony was done in the daytime.

At school we were all given the words of the official games song “Join Together”. We were all expected to join in, so we all sang the song (well, pretended to, anyway!). They thrashed the song so much on the radio that everyone was getting a bit tired of it.

Our cue was after the army had let off a barrage of cannon shots, and hundreds of doves were released into the air. We were to race onto the field, and take our allotted place as we had practiced over and over.

When the time came, however, I remember that I was so transfixed by the doves, that the rest of my schoolmates raced onto the field without me. About 10 seconds later I realised my error and tried to catch up, but with kids running all over the place, I lost them!

Our aim was to form a giant official games emblem that would look awesome from a helicopter shot from above. Our wee group were the top right hand corner of the bottom blue ‘Z’.

Well, it took me about 30 seconds to find my place, much to the annoyance of my schoolmates! It all turned out great on TV, though.

I found an old youtube National Archive clip of the Opening Ceremony – you can see all the kids running on at about the 5m 25s mark, and running off again at the 6m 20 mark.

Afterwards we all ran back to our seats to watch the rest of the ceremony.
We watched the parade of nations, with everyone cheering for their favourite country. The loudest cheer of all, however, was for the New Zealand team at the end!

Then came the time for the official opening. The runner gave the Queens’s speech to the Duke of Edinburgh, and it ended with the words “I now declare the Xth British Commonwealth Games, Christchurch, New Zealand, officially open!”.
Everybody screamed an cheered!

The Games flag was raised and the pledges read out.

After it was all over we were escorted out of the stadium, back onto the buses, and back to school. It was an awesome experience, and one I’ll never forget.

The occasion also makes good party trivia, impressing everyone by telling them I once participated in the Commonwealth Games.


I returned regulary to QEII after the Games. Dad used to bring me to international track and field meetings – I can remember watching Don Quarrie, the Commonwealth Games champion and world record holder, thrash everyone in the 100 and 200m finals.

We also had the Canterbury Regional High School Athletics Championships at QE2 every year.
My forte was the sprints – in my mind I was as quick as Don Quarrie, but in reality I was more like a rock quarry…I did finish a creditable 4th in the 1500m one year, though.

Later they built an awesome hydroslide at the pool complex, which myself and friends used nearly every other weekend for years afterwards.

As I write, the debate is still raging whether to build another stadium on the site.
For me, they can replace the building, but they can never bring back the glory of the old days.


Well, that’s my walk down memory lane for you all, and that is why the Queen Elizabeth II Stadium in Christchurch, New Zealand will always have a special place in my heart.

Scenes of Kolkata – Hope Amid The Havoc

Wellington’s Not For Me