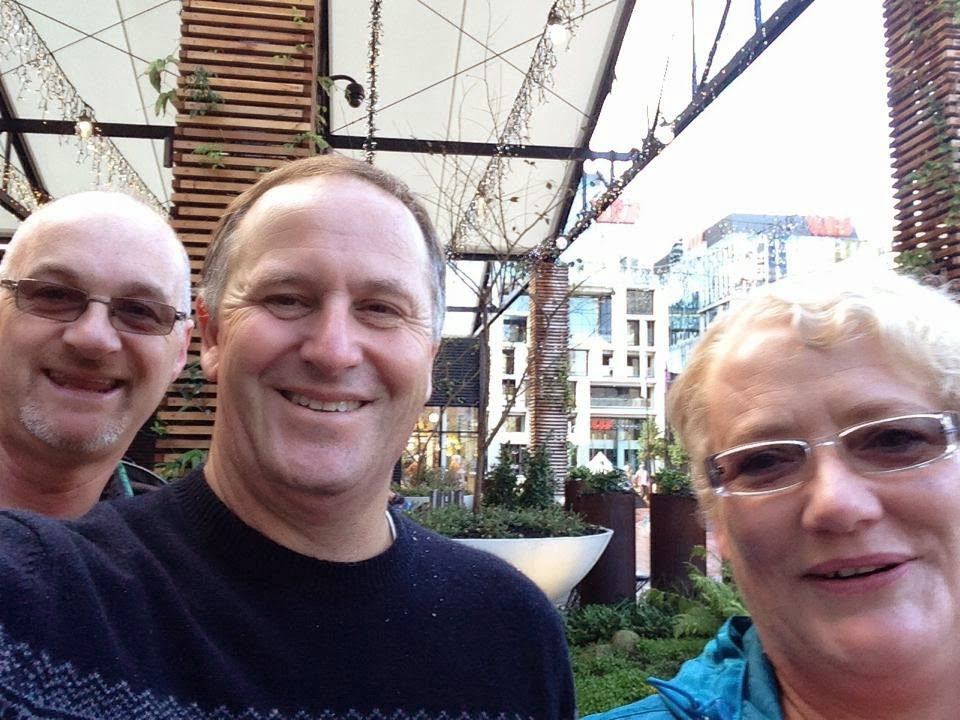 One day last month my wife phoned me at work out of the blue. The previous day she had entered a radio competition on Facebook to win an all-expenses paid trip for a weekend in Auckland for 2. She just entered her details, clicked on the ‘enter’ button, believing it would never happen to us…
The next morning (a Friday) she received a telephone call from the organisers of the competition. Her name had been drawn out, alongside other couples from Christchurch & Hamilton (we live near Wellington).
Now, I had just had the Thursday off work with a heavy head cold. I had only come in on Friday morning to get some billing done, then head home to crawl back into bed for the rest of the day. The last thing I felt like doing was hopping on an airplane. I did at one stage contemplate her taking someone else instead.
I also didn’t want to come across as a hypocrite to my employer, going home sick and then going on holiday. However, my immediate boss told me that because I made the effort to come in sick, not to record the rest of the day as sick leave when I left. When she heard we had won, she said ‘ go for it’, which made me feel better.
The prize pack for 2 included:
Return flights to Auckland
A rental car for the weekend
2 nights accommodation at a 4-star Hotel, with breakfast and valet parking
Tickets to see the touring international stage musical ‘Annie’
A credit card with $2,000 spending money – to pay for exclusive restaurant dining, lunches including regional wineries, entry to Art Museums and exhibitions, a Skywalk, and lots of spending money at Farmers’ Markets as well as an upmarket shopping centre.
Our flight was at 5.30pm that afternoon, which of course meant quickly packing and finding somewhere for our son and our dog to go for the weekend. My wife took care of all that, seeing as that’s her forte. I just did the usual man thing of sitting around feeling miserable and sorry for myself.
We made the flight OK, and I was extremely pleased I made the decision to go. We were well and truly blessed that weekend, even though I was still pretty sick. We ate and shopped, and ate more. They treated us like royalty. Did I mention we ate a lot?

By Sunday morning I was starting to feel much better.
Sunday afternoon was the time allotted for shopping at the centre. It was our last chance to spend money on the credit card before handing them back.
The centre was spread out over quite a few buildings, and as we were moving from one to another, my wife grabbed my arm and said ‘look over there, thats John Key!’. I looked, and indeed it was. He was standing in the middle of an open area, reading his cellphone. Mr Key lives in Auckland, and travels regularly to and from Wellington, our capital city.
…but before I had a chance to answer her, she was making a beeline for him.

In New Zealand, unlike a lot of other countries, we have very good access to our politicians. Most are very approachable, and generally don’t mind mingling with the public as long as they are respectful in return. Where I work in downtown Wellington, it is a common occurrence to see them going in and out of shops and cafes, chatting to the public, or jogging around the waterfront (although, not so much The Prime Minister himself).

The Prime Minister, Cabinet Ministers, senior Opposition Ministers, and visiting dignitaries are allocated security staff know as the D.P.S. (the Diplomatic Protection Squad, much like the Secret Service but more laid back).
I spotted some of them in their civvies, stationed in various areas around the courtyard, eyes scanning left and right, ready to jump at the first sign of trouble. I was aware not to rush over to him, lest they think there was something sinister about to happen.
By the time I caught up with my wife, she was shaking the Prime Minister’s hand. He said “Hello! How are you?”, like she was a long lost friend. Then he did the same to me. It turned out that he and his wife Bronagh shopped there often. She was busy scouring the women’s clothing shops, and he was playing the role of the bored husband. I must admit I was a little star struck.

We joked about his prospects in the upcoming election this September (his National Party were way ahead in the opinion polls). Then my wife asked if we could have our photo taken with him. He said “Sure, no problem!”. But she couldn’t get it lined up properly. He said “Here, I’m used to doing it” (he is famous for them, just Google ‘John Key selfies’).
He grabbed the phone and took the picture on the right.
We shook hands again, wished each other well, and all went on our way. It all confirmed to both of us how down to earth he was. He truly is a nice man – despite the fact he voted in favour of the Redefinition of Marriage Bill, allowing Gay Marriage.
(Don’t tell anyone, but my wife spotted him again later in a clothing shop with his wife. She was trying on boots while he was sitting on a chair in the corner catching 40 winks…!)

Not long after that, we headed to the airport to catch our flight home.
The trip was both exhilarating and exhausting at the same time. You know, one of those holidays where you pack so much in, you need another one just to get over it.


Then about a week ago something dawned on me:
I had just had my own personal two-minute audience with the Prime Minister of New Zealand. Just him, my wife, and myself. Something not a lot of New Zealanders can brag about…

BUT I DIDN’T SIEZE THE OPPORTUNITY TO WITNESS TO HIM!

It was because the thought never even entered my mind.

And that’s the sad part.

I was so caught up in soaking up the blessings God was pouring out to me over the weekend, so self-absorbed – all to the detriment of evangelising. In fact, looking back, it never happened all weekend. I went on holiday, and so did my evangelising. That’s a hard lesson to learn, and something I needed to repent from.

Will John Key not go to heaven because I never witnessed to him?
Maybe yes, but ultimately no. God has placed knowledge of him in his heart so that he will have no excuse on Judgement Day (Rom 1:18-20), and I’m sure there have been and will be others ready and available to witness to him.

But I missed out on an opportunity to grow. And God missed out getting more glory.

So there really was no excuse for me.

(Mr Key, I have linked you to this article via your twitter account. When you get the chance, please click on the About You page above. Thank you)

I know, I know – this was all providentially pre-arranged by God NOT to happen, and that I shouldn’t beat myself up about it because Christ has already forgiven me for it.

But I still have that sour taste in my mouth that doesn’t go away quickly.

All I can do about it now is suck it up, learn from it, and move on.

Will you support me in prayer too? And while you are at it, pray that God will give YOU the courage to witness EVERY opportunity you get!