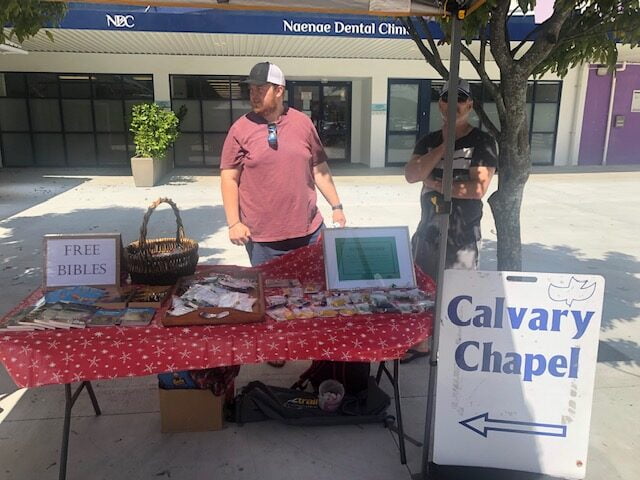 Today was the re-scheduled day for our Naenae Christmas Market Outreach. Dec 4 was unfortunately rained out.

Present for prayer at my house prior was Maree, June, Warren, Mike, Di, Frances, and Erica. Others from the fellowship met us down at the shops.

I opened with the words of the trial of Jesus in John 18:

“Then Pilate entered the Praetorium again, called Jesus, and said to Him, “Are You the King of the Jews?” Jesus answered him, “Are you speaking for yourself about this, or did others tell you this concerning Me?” Pilate answered, “Am I a Jew? Your own nation and the chief priests have delivered You to me. What have You done?” Jesus answered, “My kingdom is not of this world. If My kingdom were of this world, My servants would fight, so that I should not be delivered to the Jews; but now My kingdom is not from here.” Pilate therefore said to Him, “Are You a king then?” Jesus answered, “You say rightly that I am a king. For this cause I was born, and for this cause I have come into the world, that I should bear witness to the truth. Everyone who is of the truth hears My voice.”

We spoke of the importance of portraying the real meaning behind Christmas, as most people out there think it is all about presents, trees, snow, and family.

We prayed for open eyes and hearts to witness to the lost at the mall. We prayed for courage to tell them the truth of why Jesus came. 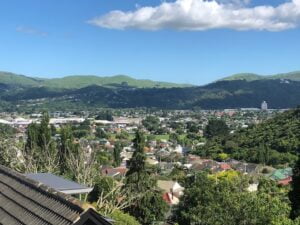 It was a beautiful day for once (we have been striking out with the weather lately). However, with the re-scheduling of the Christmas Market, quite a number of stalls and demonstrations had pulled out. There were still lots of people coming and going, so there was no excuse to shirk our responsibility!

Pastor Jarryd & Josh had set up our stall. We had procured many New Testament Bibles to give away.

A team in our fellowship had also made up some gift packs.

These consisted of a Christmas tract from Operation513.com, a poem, as well as a small chocolate bar.

The gift packs and Bibles went fast – both from the table, and from those of us who were doing the rounds.

I used the packs as a Gospel segue, saying “Here’s a free Christmas gift for you. It has a story of the true meaning of Christmas. Do you know what Christmas is really about?” I found this to be a great way to start a Gospel conversation. Here’s a few condensed examples of conversations I had:

Tor: I asked him what Christmas was really about. He said it was all about family.

‘What about the word Christmas, have you thought about what that means?’

‘Well, it literally means the Mass of Christ. Do you know who Christ is?’

‘Christ is a name for Jesus. He was God in human flesh.’

‘I don’t know much about that. To me, Christmas is when you gather with the ones you love to share. I couldn’t really care about that other stuff. The only religious things I care for are ones related to Tikanga Maori. Everything else is just nonsense.’ [walks away].

Matt: I knew his name before I talked to him, as he was wearing a Hutt City t-shirt, with a name badge with the name ‘Matt’ on it. I know, I’m very clever sometimes.

‘Here’s a Christmas gift for you, with the true meaning of Christmas.’

‘It wouldn’t be about Jesus coming to earth, would it?’

‘Yes, but I can’t say much at the moment, because I work in the library, and I can’t be seen to talk about religious stuff. I could lose my job.’

‘I understand. Would you like to take some of these to distribute later?’

‘I can’t take them back to the library, sorry.’

‘Ok, so when you have finished reading your one, feel free to pass it on.’

Kelly & Mina: These two ladies were sitting on a bench opposite the old swimming pool.

‘Thank you very much!’

‘It includes a story of the true meaning of Christmas. Do you know what Christmas is all about?’

‘Yes, it’s about getting together and being with with family and friends.’

‘Do you realise whose name is in the word Christmas?’

‘It’s Christ. It’s the day we celebrate God coming forth in the form of a man. Do you know why He came?’

‘Something about being a baby isn’t it?’. They were losing interest, so decided to move to the Gospel.

‘It’s much more than that. Think about all the times you’ve lied, all the things you’ve stolen. Think about every time you have used bad language, or cursed God’s name. When we die we all have to stand before God, to give an account for all of those things. He will find us guilty, and our punishment will be a place called hell for eternity. I don’t want that to happen to you. But God did something so that you don’t have to go to hell. Do you know what that was?’

‘He came to earth as a baby, which is what we celebrate this time of the year. He was fully God, and fully man at the same time. He lived a perfect life. Then God sent Him to the cross. While He was on the cross, God crushed Jesus with yours and my hell punishment. All that lying, stealing, blasphemy – He took the punishment for all that, what we deserved. He died, so that those with faith in Him could live. So, if you believe by faith that Christ has taken all your hell punishment for you, you will be declared not guilty on judgement day, and go to heaven.’

I asked some checking questions to make sure they understood. I had to go over a couple of things, but they got it in the end.

‘You have a great Christmas, ladies!’

Kevin: This man looked pretty tough. From the look of what he was wearing (ruby league tank top, shorts, sunglasses), he looked intimidating. I made a point not to wind him up, otherwise I might have to put him in his place (yeah, right!). It turned out I couldn’t have been more wrong about him.

‘Here’s a Christmas gift for you. Do you know what Christmas is all about?’

‘Thanks! It’s all about family, sharing and giving with ones you love’.

‘What about the real reason behind it?’

He looked puzzled. ‘I’ll give you a clue. The word Christmas has the word ‘Christ’ in it’.

‘Oh yeah, that’s right, I have heard about that’.

‘But do you know the reason He came?’

Let’s put it this way: have you been a good boy for Santa this year?’

‘Ah, yeah I think so. I’ve been pretty good this year’.

‘Can we take a little test to find out?’

‘Think of this like a test that you will need to take when you die. And if you pass, you get the best gift and go to heaven. If you fail, then you get a lump of coal, and go to a place called hell. Ready?’

‘Kevin, these will be the things you are judged on. What are you going to say to defend yourself?’

‘I’ll just hope that He will see that I’ve changed for the better’.

‘But that can’t erase your past. A judge will convict you of a serious crime regardless of how much you have changed. What you need is someone to take your punishment for you. Do you know who that might be?’

‘That’s where Christmas comes into it’.

‘He came to earth, lived a perfect life that you and I can’t live. Then God sent Him to the cross, and while on the cross, He crushed His Son with yours, and my sin. Then three days later, He raised Him from the death, to prove that death has been defeated’.

‘I remember now. I used to go to church. I should go back’.

‘You should read it. Start at the book of John in the New Testament. But please don’t go to sleep tonight without putting your life right. Place your faith in Christ before it’s too late’.

‘I will’ Kevin said, as he shook my hand. I pray he does.

Others had some great conversations as well. I think there were only a couple of Bibles left out of a whole box!

We pray that God gets the glory from all our endeavours.