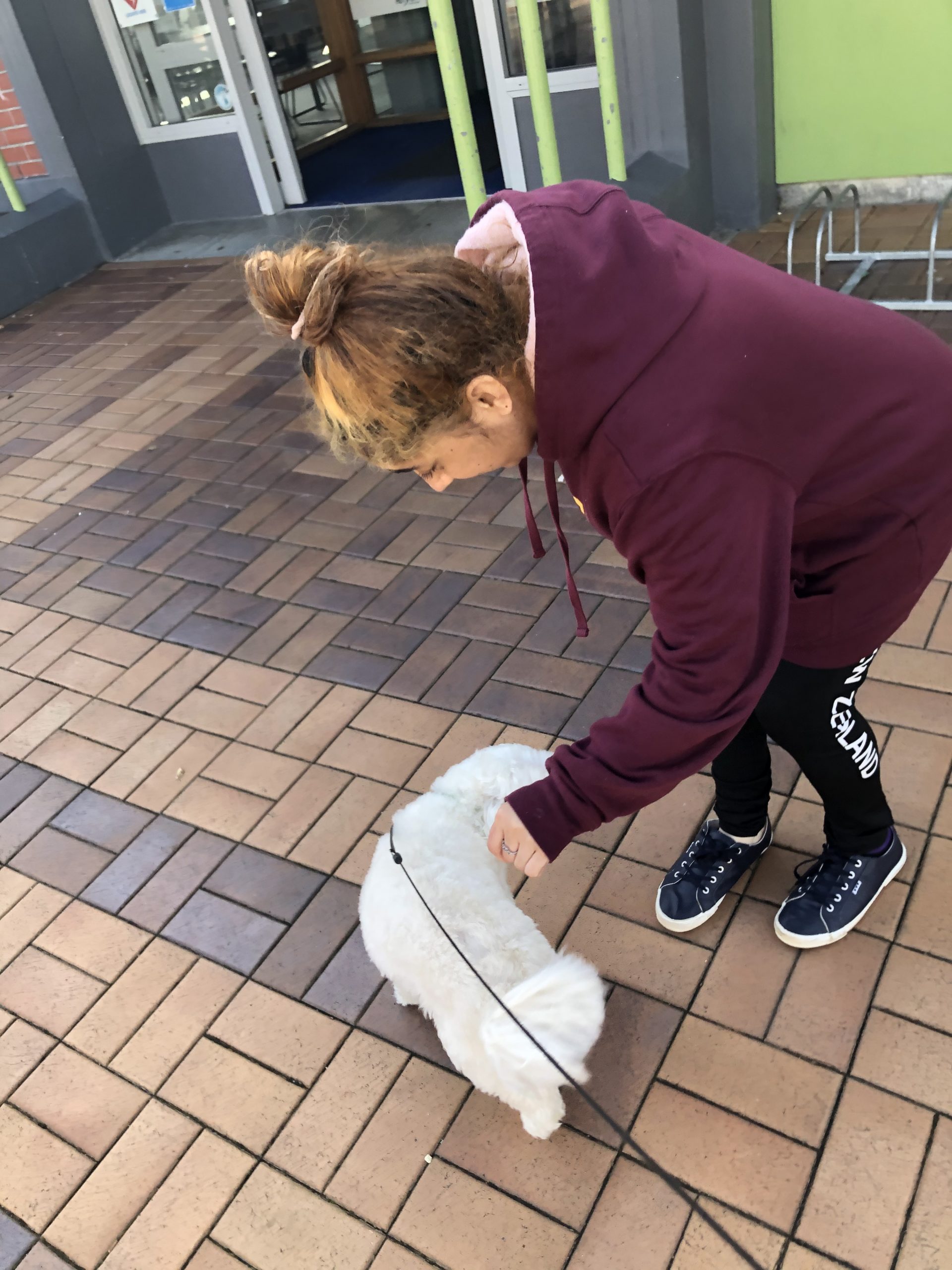 This was not one of our scheduled Gone Fishin’ ministry outings, but I thought I’d write it up anyway.

My work owed me a day off for a booked days leave I couldn’t take during lockdown. It was a lovely mild winters day, so I decided to spend an hour or two down at our usual fishing hole – the Naenae shops. My wife was away, so instead of leaving our dog Buster at home alone, I thought I’d bring him with me. It turns out he’s a great draw-card for people! Why didn’t I think of that earlier??

Weekday patronage is slightly different than the Saturday. The market isn’t on, but there are always people coming and going, and families playing at the playground.

The million dollar tracts were being gobbled up – so much so that I ran out, and had to start using trillion dollar ones.

Around the back by the mower shop I met a Maori gentleman, whom I think said his name was Race. He had a Mormon upbringing, so of course he was relying on his good works to get him into heaven. I tried to get him to understand that he wasn’t good enough to make it on his own merit, and needed to transfer his trust in himself, to Christ. The wall of good works kept coming down, but I think he was starting to doubt himself. I asked him to think about what I said, and read the tract, as well as the Good Person Tract.

Outside the laundromat I met a lovely lady named Pipi. She also had a Mormon background. She tried to convince me that because she had changed her ways, she would get into heaven. She wouldn’t accept that she still had to stand to account for the the laws she had already broken. I too hope she is convicted enough to transfer her trust from herself to Christ.

I walked around to the bus stop, to find a lady seated there, smoking. The conversation I had with her humbled me to tears. I’ll leave that story to last!

Sitting in the sun was a lady named Sam. Sam believed in a higher power, but wasn’t sure who or what that was. I asked if it could be God. She said she didn’t know if God existed, so I used the building/builder, painting/painter analogy to help prove that creation was proof of a creator. She nodded and agreed that someone created us. I took her through the law. She couldn’t agree that stealing from a store meant that she was a thief, because no one got hurt. I asked her what would happen if she said that to the judge. She laughed. I told her the Gospel, but she didn’t want to transfer her trust in her own goodness, to the good Saviour. Please pray that Sam would be convicted.

I got up, and said hello to a man who stopped to pat Buster. His name was David. David was Singaporean, and when I gave him a trillion dollar tract and took him through the law, all he wanted to do was regale me with personal stories of the Japanese occupation of Singapore in 1942. Not that I was annoyed – I love listening to the old folk tell stories – but I was more concerned with sharing the Gospel with him. So in between each story I asked him a law question. His answer would somehow bring him back to Singapore. A bit frustrating, but we parted on great terms, and I asked him to think about what we discussed, and to read the tracts.

I bumped into Daryl again (we witnessed to him last time out – see here). I asked if he had read the literature from last fortnight. He then said he was illiterate! He didn’t tell me that last time! The Gospel tracts were still at his home, and he said he would get his boys to read them to him.

OK, back to my conversation at the Bus Stop…

I’ll call this lady ‘C’. C was probably in her thirties. I offered her a trillion dollar tract, and took her through the law. About halfway through she asked “Are you doing ‘Way of the Master’ on me?” I laughed, and asked her if she had a Christian upbringing. It turned out she had been to church, made a commitment, had been baptised, but had fallen back into her old habits. I suggested that she could have had a false conversion, and that maybe she hadn’t heard the Gospel properly.

The phone in my pocket vibrated. I knew it was probably my wife checking in on me from up in Te Awamutu, so I made the decision to let it ring off and talk to her afterwards.

I thought I would recount the Gospel to C. I told her about how God had sent His only Son, and crushed Him for the sin that she had committed, and she needed to transfer her trust in herself and her own goodness, to trust in the Saviour in order to get to heaven (hmm, a common theme today!). She began to cry and started to shake. I’m not too manly to admit that this made me cry as well. I said that nobody knows when they are going to die, and there was no greater decision she needed to make today other than to turn her back on her old life, repent of her sins, and place her trust in Christ. She nodded. She said that before I came, she was going to finish her cigarette, and get a box of beer from the bottle store to take home – but not now. She agreed to let me pray for her. So I prayed that God would encourage her, and be gracious enough to grant her repentance, that she would place her faith in Christ who paid the price for her sin in His life’s blood.

Afterwards I gave her some more literature. She asked which church I go to, so I gave her one of our church cards. She said she might come, and bring her children with her.

I was still shaking when I rang my wife back afterwards. She prayed for C over the phone, and said she would get the people she was staying with to pray for her as well. Could you please pray for C too??

Well, that was my two hours at the Naenae shops. It went super-quick. At the beginning of the day I had no intention of going down. But I’m very happy I did, as God had providentially orchestrated people to hear, read, and respond to his beautiful Gospel!

If you are looking for someone to pray for, it would be appreciated if you could please lift up Race, Pipi, Sam, David, Daryl, & C before the Lord.