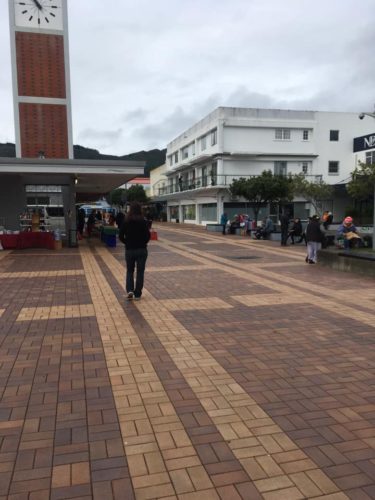 I thought it would be a nice idea to start chronicling our Gone Fishin’ Ministry endeavours. On the 3rd Saturday of the month we hit the streets around  the Naenae shops, giving out Gospel tracts, and starting Gospel conversations.

If you are keen to join us to see what its’ all about, drop me an email or DM me at the media links in the header above!.

Present today: Maree, June, Frances, Josh, Jennifer (neighbour, who is a Christian and wanted to observe what we do). A new couple from our fellowship, Mike & Di, also came to observe. Pastor Jarryd and a couple of other regulars sent in their apologies.

I opened with Eccl 2:3-11, pointing out the folly of the unbelievers’ search for fulfilment outside of God, and that we have the privilege of pointing them to Christ. We talked about of the important task we have before us. Our corporate prayer centred on loving the lost enough to giving them the Good News of the Gospel.

We drove down to the Naenae shops and split up. Di teamed up with Maree, and Mike tagged alongside me to observe. He said that he has been eating and drinking up ‘Way of the Master’ on youtube, and it had stirred up the passion for evangelism. I was excited, as this is what happened to me as well! The weather was quite mild, which always brings people out.

I always introduce myself to all I converse to, then write their names down in my phone afterwards. It helps me to remember their names when I pray for them later.

I spotted a family sitting in the sun, so approached them with a million dollar tract. Ronnie (Mum) took the tract. Her big pup wanted to lick me to death. I managed to get to her to admit to lying, stealing and blasphemy (with young kids around, I decided to bypass lust!). She said she would be guilty on judgement day, but tried to argue that there are other religions, and Christianity is just one way to heaven. I pointed out the exclusivity of Jesus’ statements (John 14:6), and that makes Christianity different. She agreed. I asked her if it concerned her that God would send her to hell. She said ‘sort of’, so I gave her the Gospel. I’m not sure if she was convicted enough to repent, but she agreed to think about what we discussed. Husband David turned up hallway through. I did  introduce myself, but he was disinterested in what we were talking about.

Afterwards, Mike said “boy, you don’t muck around, do you?” I laughed and said that I’m not one for small talk!

We walked around to the bus stop, but the bus was there, so the stop was empty. We walked around the back by the recycling station, and bumped into Brian. Brian was a fascinating chap. A Pacific Islander, probably older than us. He took my tract. He went on to say that he is or was, a research scientist with the Mallagan Institute. He said that they were close on finding a vaccine for Covid-19. He also said that he has a spot on Access Radio, where he tries to prove the biblical account of creation. I wanted to know if Brian knew the Gospel, so asked him to explain it to me. He gave me the essentials; fall of man, the need for repentance from sin before we die. So we gave him the benefit of the doubt, encouraged him, and went on our way.

Around the corner we came across Daryl. Daryl was in an electric wheelchair. He took my tract, and thought that he would go to heaven because he has changed his ways, and not doing the bad stuff he used to do anymore. I gave him the good person test, and he failed miserably. He still thought he would go to heaven because he had changed, so I gave him the judge / accused analogy and asked him if it was therefore reasonable for God to overlook his sin. He still thought yes, and was trying to justify himself. I was about to shake his hand and walk away, but Mike jumped in and gave him the Gospel, using the analogy of Christ taking his punishment for him. Daryl was quite receptive to this. We asked him to think about what we talked about, and he said he would.

Afterwards Mike asked me if he had done the right thing by giving him the Gospel. I told him that I wasn’t going to because he was still trying to say he was as good person, but due to his good response to what Mike said, it probably was the right thing to do. So much for observing! It just proves that other people can pick up different signals – I’m more blunt than most people. Mike apologised for talking over me, but he didn’t have to – he did an awesome job!

Sha was begging on the ground next to the eftpos machines. We sat beside her, and I gave her a million-dollar tract. Her eyes lit up, as she thought it was real money. I asked her if she was OK, as something in her eyes and her manner gave us the impression she was high on something. She said times were hard. I asked her if she thought she would go to heaven when she died. She didn’t really know. I took her through the law. She admitted to lying, stealing and blasphemy, so I asked her if God would find her innocent or guilty of breaking His commandments. She said “You have a nice day”. She was getting a bit agitated at our questioning. I pleaded with her to think real hard about what we were saying. I also gave her a good person cartoon tract to help explain what we were talking about. She said she would.

Junior was also begging. Junior is a regular beggar at the mall, and I have spoken to him numerous times, and given him lots of tracts. He says he goes to the little church around the corner. He expresses a faith, but I am still unsure of his salvation. Mike asked him if he was hungry, and he would get him some food if he wanted. Junior asked for a pie and a drink, so Mike jogged off. He gave them to Junior, and we went on our way. Mike also brought food for Sha, but she didn’t want it. I guess she only wanted money, something we never do.

We all met together later in the middle of the mall. Some friends from another church were there, and my wife came down to buy some chutney at the market. While we were there, I spotted a couple of teenagers sitting in the sun. I said to Mike “let’s go chat to them”. He offered them the food, which they declined, so he just passed it to a woman passing by, who gladly took it!. The boys were Brayden & Seymour, from St Pat’s College in Silverstream, about 8-10km away. I asked them if they thought they would both go to heaven when they died. They both said ‘yes’. As it was a Catholic College, I asked them to explain the Gospel to me. Brayden said “pray to God, and be good to people”. He said they had been learning about abortion at school, so I gave them a Living Waters ‘180’ tract and asked them to watch the movie online later. But the tract served two purposes, because on the back was an IQ test. I asked Brayden to take it, and he failed. It was a clever play on words, designed to trick the mind. I said “see how you can be passionate about something but still be wrong. Another thing people get wrong is if they think they are good people”. I gave them the test, and both failed on most of the points. They thought they would still go to heaven because they prayed and were good to other people. The courtroom analogy helped them understand how angry God is at sin. Then Mike jumped in and again gave them the beautiful Gospel of how Jesus paid his fine for him, and that he required repentance. He was on fire! The boys both nodded and said they would think about what we said.

When we re-joioned the group, Maree explained that she was delighted we talked to them. She had tried earlier, but they weren’t interested.

I looked at the time, and was surprised to see that is was mid-day already, and the others were starting to head off!

In between speaking to people, we were handing out tracts by the dozen. God was good to us today.

If you want to pray specifically, please remember Ronnie & Dave and family, Brian, Daryl, Sha, Junior, Brayden & Seymour. Pray that the material we gave them will produce fruit for the kingdom. Pray also for all those who took our tracts, that they will read them and be convicted!

May the Lord use this time to bring increase to His kingdom, for His glory!