It was a stunning day for our February Outreach.

Present today: June, Isaac, Maree, Paul, Frances. Peck Choo met us down at the shops. Others sent in their apologies.

Then they journeyed from Mount Hor by the Way of the Red Sea, to go around the land of Edom; and the soul of the people became very discouraged on the way. And the people spoke against God and against Moses: “Why have you brought us up out of Egypt to die in the wilderness? For there is no food and no water, and our soul loathes this worthless bread.” .

We discussed how, although our journey can be long-winded and unpleasant at times, it does not mean that we are not in God’s will. The Israelites were still headed for the promised land, but God’s will took them via many ways. If we have our eyes on the promised land, then we have no need to be discouraged. Lots of people will walk the smooth, easy way, but those lead to destruction.

We prayed for boldness, strength, and guidance in our conversations.

It was quite busy down at the Naenae Market. Summer may have brought out a few more vendors, as well as more shoppers. Later on, there was a covers band which was drawing quite a crowd.

Most people happily took tracts off me. Here are a couple of conversations stood out:

A young lady took a tract from me, but didn’t know what happens after she died. She thought she would go to heaven, but only because of her own standard of goodness. After taking her through the law, she came to realise the trouble she was in. But it did not move her. It did not convict her to change. She understood that she would go to hell, but no matter how urgent I was pleading with her, I couldn’t convince her. I think I came to the conclusion that it was not in God’s time to save her at that moment. I was merely sowing or watering, and I needed to leave it to God to grant the increase. So I left her with a few tracts, and we said our goodbyes.

The other standout conversation was with a young Pacific Island man. Well, he looked young, but he was a big unit, like he could crush me with his pinkie. I gulped, gave him a million dollar tract, and asked him what happens after he dies. He said there was some higher power in control. Maybe it was God, or Allah, no one knew. He had a real sarcastic tone to his voice, so I braced myself for a torrid conversation. He said there was no way to prove any religion was right or wrong, including Christianity. He said that funnily enough, his name was Christian. I pointed to the old Post Office clocktower, and asked him how he knew 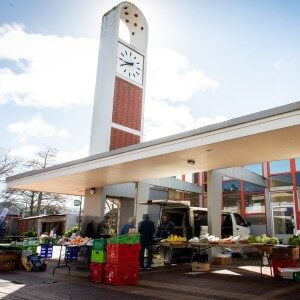 there was a builder for it. He said “what sort of question is that? The fact that it exists proves there was a builder!”. There was some pop art / graffiti on the roller door next to us. I explained that in the same way we knew there was a painter, because the painting exists; building = builder, painting = painter, and creation = creator. He thought for a second, and said it didn’t prove anything. I wanted to get to the Gospel, so I asked him if there was a God, would he be pleased with him? He said probably not. I asked him if he had lied, stolen, taken God’s name in vain, or lusted after someone. He said he had. I asked him if these are some of the things you would be judged on, would you be innocent or guilty? He said guilty. And would he deserve a reward or a punishment? He said these were all dumb questions because it only matters if you believe that is the way it’s going to happen. I asked him to try that in a court of law – yes I’m guilty, but I don’t believe in you, so it doesn’t matter. He conceded on that. He  was getting agitated with me, and I wasn’t in the mood to get injured, so I ended the conversation by saying “Christian, you know there is a God. You know that you do not meet God’s expectations. You know you are getting judged for breaking His laws. But your self-righteousness is preventing you from submitting to His authourity. Therefore you are in danger of incurring His wrath on Judgement Day. I don’t want that to happen. Please think about what we talked about. Please read the leaflets I have given you, and follow their suggestions. That’s all I ask.” He agreed he would, and we finally parted with a handshake.

I gave out lots of tracts to the folks listening to the covers band, but had to leave not long after that. I left the others deep in their conversations.

Paul later gave me an update of his conversations:

So, it was a great day out. The weather played a great part in ensuring a good turnout of lost people to talk to. I pray that those we did will be convicted, and turn from their sin!