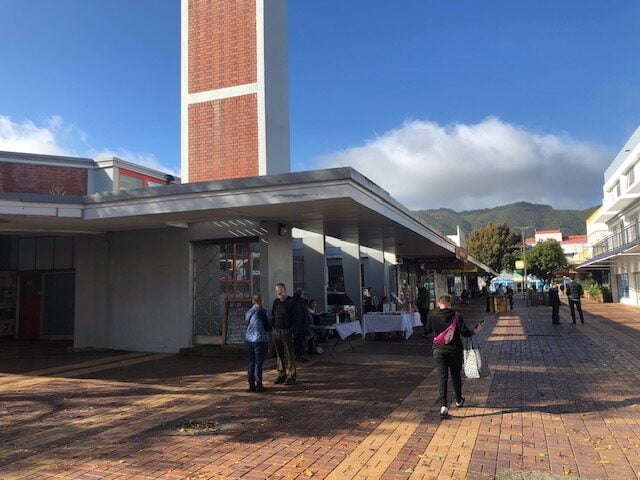 Well, it was a big team out today!

Mike took the devotions today, focusing on the importance of using the law in evangelism. Jesus modelled this when talking to the rich young ruler. It is offensive not to use the law in evangelism. It is like telling someone that Jesus died for their sins, without telling them what sins they have committed, or like telling someone the fine has been paid for them, without telling them why they received the fine in the first place. But when we take someone through the law, they see the danger they are in, and will then see the good news in a different light.

Mike touched on some verses emphasising this:

The law of the LORD is perfect, converting the soul (Ps 19:7)

Therefore by the deeds of the law no flesh will be justified in His sight, for by the law is the knowledge of sin. (Rom 3:20)

Moreover the law entered that the offense might abound. But where sin abounded, grace abounded much more (Rom 5:20)

We prayed for boldness, and the guidance of the Holy Spirit to direct us to the people He has providentially provided us to meet.

Down at the shops it was less busier than usual in terms of the market stalls, but there were still lots of people coming and going. The team immediately split up and went looking for people to witness to.

Many people took tracts, but not many of them were willing to engage with me. Of the ones that did, these are the ones that stand out:

Mahina: I offered her a million dollar tract and asked her what happens after she dies. She considered herself a Christian, and said she would go to heaven because she was pretty good. Hmmm, time for some truth, I thought! I took her through the law. She admitted to lying and stealing, but then got super self-righteous at me. She said I couldn’t accuse her of sinning because Jesus washed her sins away. But when I asked her “If you died and faced God on Judgement Day, and He asked her why He should let Mahina into heaven, you would say ‘Because…’ She answered that because she used to be a horrible sinner, but now she has changed. She kept going back to her good works. No matter how I tried, she would not accept anything to do with her being a sinner. As far as she was concerned, the church she attended had told her that she was fine. So I explained the missing ingredient – what is she placing her faith in, Christ’s finished work on the cross on her behalf, or her changed ways? Then I shared the true Gospel with her. I said that if she was going down on a plane, her plan was to jump and flap her arms. I said please don’t do that, I’m showing you where the parachute is, and that she is doomed. I told her that if her church wasn’t telling her the truth, maybe she should look elsewhere. She took offense to that, said she didn’t want to talk anymore, and walked away. Oh Lord, let this woman see the light!

Sedo: He was a pleasant young Pacific Island man, sitting watch his children play on the playground. He laughed when I gave him the $1m Gospel tract. He said he went to church every week. So I asked him to tell me how he knows he is going to heaven. He said that because Jesus has changed him. He used to be a bad boy, but Jesus helped him to straighten up his life. I heard the warning bells go off in my head – a changed life is not necessarily proof of a regenerated heart. So I gently took him through the law. He admitted to lying, stealing, blasphemy and adultery – although I had to labour a bit on the last one. Sedo was humble in his responses. I asked him what will he say to God when he stands before Him on Judgement Day. He said he would look at the changes he has made to his life, and hopefully see that was enough to let him into heaven. So I asked him who his faith was in, his changed life, or Christ?  He said Christ. I asked him why, but he kept going back to Jesus changing his life. So I went over the true reason Christ died on the cross for him, and he finally understood that he would be in big trouble, and would be going to hell. When I asked him what did Jesus do so that he didn’t have to go to hell? He said He died on the cross. I had to stress that Jesus took his hell punishment for him, and that he had to accept that by faith. He nodded, and said it made sense. I asked him when was he going to transfer his trust in himself to Christ? Praise God, he said he would do that when he got home! I also asked him that if his pastor hasn’t preached this truth from the pulpit, to ask him why. He shook my hand, thanked me, and went to play with his kids. I noticed I was getting a bit angry. Angry at so-called pastors who either don’t know the Gospel, or refuse to preach it from the pulpit. The Gospel is simple, so why do they make it so hard for themselves?

Eddie: He was around by the Naenae Tavern, smoking a cigarette next to his running van. He asked what the $1m tract was all about. I said it had the $1m dollar question on it – what happens after we die? He said he didn’t know, but if there was a heaven, he would go there because he was a pretty good person. I asked him what standard of goodness was he referring to. He said compared to a lot of people he knows, he was as good, or better than them. After explaining that there were over 40 definitions of good in the dictionary, but the highest was moral perfection. That’s the standard God sets, so did he match up? He said he would be OK, so we went through the law. He was not good at all! I asked him if those were some of the criteria for getting into heaven, would he make it? He said probably not, but if that was what was going to happen, so be it. I asked him if he knew what God did so that he didn’t have to go to hell. He said it was something to do with Jesus or something. So I told Eddie that he broke the law, but Jesus paid his hell fine for him. At the moment, he was trying to be good, but knew it wasn’t enough, so was like a man in a plane that was going down, and that he had given up, and was cowering in the corner waiting for the inevitable crash. I said I was here to say don’t do that! Here’s a parachute. Don’t give up, there’s a way out. Put on the parachute by transferring your trust in yourself, to Christ, who paid his hell fine for him. He nodded, understanding now. He thanked me and said I had given him something to think about. I said to not leave it too long to act, as there was no guarantee of tomorrow. I gave him a Gospel of John to read.

I noticed that others were deep in conversation. June was engaged with one gentleman for an hour! He was an intellectual, and argued every step of the way.

I noticed that Mike & Di, as well as Cristian, trying to talk to a gentleman that I tried to engage with earlier. I gave a tract to him, he mumbled and pocketed it, but the others got a bit of tongue-lashing. I guess he must have read the tract!

Maree & I were having turns at the bus stop – we both like to engage with those waiting. One gentleman waiting was extremely sarcastic to me when I asked him what happens after we die. He told me that there was no way I could know if anything I was saying was true. He swore something at me before he jumped on the bus. All I can say is I’m glad he said that to me while Maree wasn’t around.

I noticed Peck Choo engaging with the usual guys that hang around the shops. These are people that we have all engaged with over the years, but have responded negatively. God can do anything, so might one day decide to soften their hearts!

So it was an awesome day out. Many heard the Gospel, but we wait on God to grant the repentance!