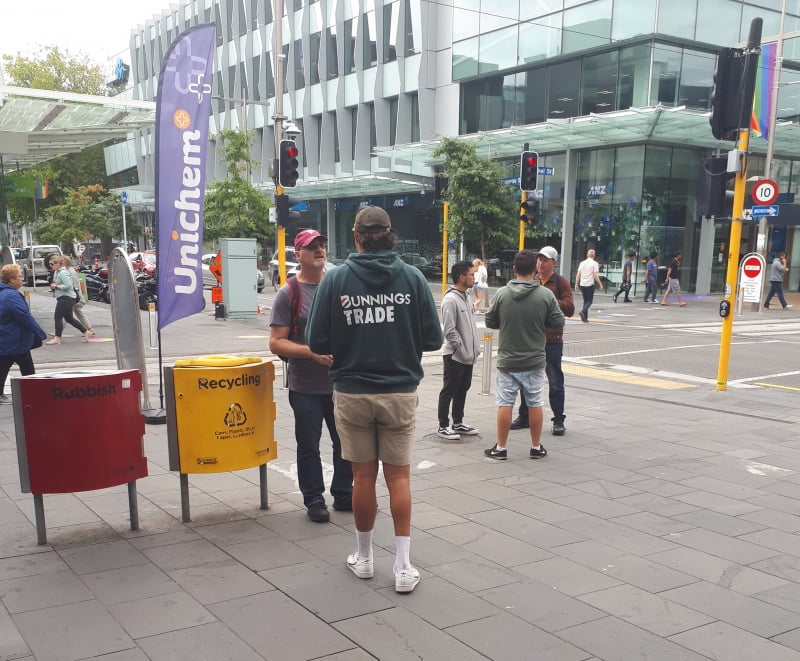 Well, today was the 5th and final day of the Christchurch Outreach. I can’t believe how fast it’s gone!

Today we were back in the city centre. We met at speakers’ corner for prayer.

Afterwards, we spent a bulk of our time in the Cashel Mall area.

Glen, Andy, and I started at the Bridge of Remembrance doing walk-ups. At 9am everyone seemed to be on their way to work, so it was hard to initiate conversations. Well, it was hard for me – Glen and Andy had no problems.

Once again Andy pulled me up for smothering people or surprising them. Aaargh, it’s a habit I need to break!

Callum: He broke the drought, and it was worth the wait. I took him through the law, and he was very respectful and honest. He understood he was going to hell, and that the only way for him to escape the wrath was through faith in Christ. When I asked him if he believed it, he said ‘nah’, and moved on. I stood there stunned for a while, then prayed for him.

One man took a million dollar tract, but when I asked him what the million dollar question was, he said “nah, I’m good!” and handed it back. I tried to get him to see how good he really was, but he laughed and walked away.

We decided to walk up to the bus terminus and try there. I approached a couple sitting on a bench, but before I could get a conversation going, I was told on no uncertain terms where to go. There was an aroma of a certain sweet smoke in the air, so I quickly backtracked.

I crossed over to the other side of the street, as I could see people coming and going around the Crossing mall. A couple of High School kids come out…

Thomas & Pascoe: I thought these two may have been bunking (skipping) school, but it turn out they were in between classes. They thought the million dollar tracts were cool. When I asked them what happens after we die, neither really had really given it much thought. I asked them if they thought there was a God, and both shrugged their shoulders. I gave them the building / builder, painting / painter, creation / creator analogy, and they both agreed it made sense. I must admit, it was refreshing not to be met with a backlash of evolutionary pseudo-science! I asked them if there was a God, would He be happy or angry with them? They didn’t know, so I took them through the law. They failed. When I told them that they both would end up in hell if God judged them, they went silent. When I told them that God did something so that they didn’t have to go to hell, their demeanour lightened again. I gave them the beautiful Gospel, then asked them if it was true. They didn’t know, but had to go to their next class, so all I could do was stress the importance of what we talked about. I gave them good person tracts, and they skated away. Oh, that all would be open, and respectful as these two!

We walked back to speakers corner in the square and had lunch. I was introduced to a man named John, who was interested in evangelism, and he asked me to do a role play of how one of my witnessing encounters would go. He found that very helpful. He tagged along with us for the afternoon.

After lunch we walked back to Cashel St and continued one-on-one. Roger turned up with Operation513’s After Life Flip Chart. As I was getting exhausted from standing up handing out tracts, I passed out Living Waters’ Are You A Good Person cartoon tracts. I asked if they were good people, then point them to Roger to take them through the test! Another man Graham also turned up to do some one-on-one. It was an answer to prayer for Glen & Andy, as they were both exhausted. They had already done a whole weeks’ outreach in Whangarei, and were driving to Dunedin the next day to do it all again the following week.

Garfield: As I was sitting on the bench handing out tracts, an elderly gentleman sat beside me. He said “That’s another $1,000 gone”. He was exhausted, but his wife Helen went into the fashion shop next to us. So I laughed, passed him a million dollar tract and said “This might make you feel better”. He said “Wow, a million dollars. What’s this about?”. I told him it was a Gospel tract. He said he and his wife for over 20 years lived by faith out of a caravan, touring the country, sharing the Gospel. By the way he was talking he was from a Charismatic background. I asked him how he would share with me how to find eternal life. He said it was by repentance of sin, and faith in Christ. He added another couple of squishy things as well, but I didn’t think it was my place to correct these, as he knew the fundamentals. I pointed out all the people doing one-on-one evangelism around him. He was happy, as he had to stop evangelising through losing his hearing (confirmed, as we had to stop talking every time a tram went past). He was glad to see there were other workers still working to bring in the harvest. Helen came out of the shop without any purchases, so he jokingly said “Yay, we can eat tonight!”. We shook hands, and they left. It was an encouraging encounter!

I crossed the street to find some shade from the sun. There I had a few interesting witnessing encounters…

Sue: I gave her a good person tract. She said she didn’t need it, as she reads her bible and goes to a home group every week. So I asked her if she could tell me what I needed to do to find eternal life. She said I had to live a moral life in line with the Bible, and try to be a good person! I asked her if she was a good person, and she said “yes, of course!”. I started to take her through the law, but she accused me of being a legalist, threw the tract at me, and walked away!

Reuben: Passed by with his girlfriend He took a good person tract, and his girlfriend was trying to drag him away. She left, and I asked him what happens after we die. He said something like “Whatever you believe, that is what will happen”. I haven’t struck a post-modern for a while; I thought they had all disappeared back into the woodwork! I asked him what was more important – what we believe, or whether what we believe is true. He asked me what is truth? So I gave him the truth! His girlfriend was ringing him, so he had to go.

Quinn & LJ: Young high school students who thought they were good people. They believed there was a God, so I used God’s standard of goodness on them, and they fell miserably short. When I gave them the good news, Quinn was riveted, but LJ was trying to pull him away. They had to catch a bus, so I gave them a good person tract as they left. Hopefully they both took in enough Gospel to convict them!

We finished soon after that. I was exhausted after one full week of evangelism, so I don’t know how Glen and Andy do it! It was an amazing week. Graham finished in prayer, giving thanks to God for allowing us to do this, and praying that all our work will bear fruit. Amen to that!

Glen & Andy thanked me for coming down, and said I was a true blessing to them. Honestly, it was more so the other way around! I was humbled to be a part of this outreach. Those guys have taught me so much this week – stuff I can put into practice going forward.

Please pray for the ministry of Operation513! If you want to find out more about them, then click here. All of their 2021 Mission Outreaches are connected to the Christchurch battle logs here.

For those in Australia, you can order their tracts here. Those in New Zealand can order them here.Those in the UK/ Europe here.