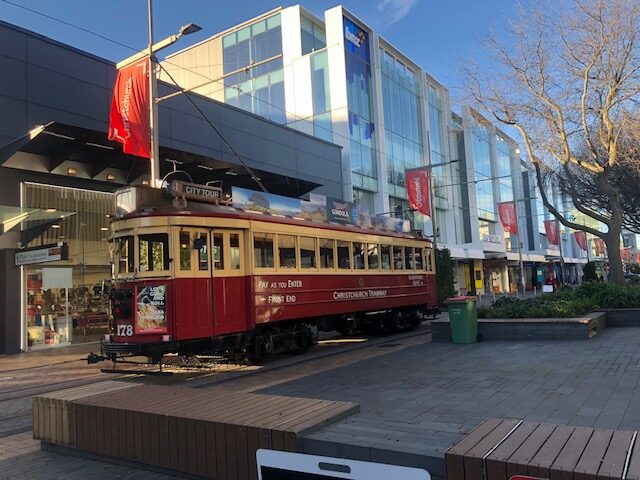 Last week I took the opportunity to take some days off, and headed to Christchurch for some R & R with some old friends (well, they are as old as me, so take that how you wish!).

While there, I contacted Glen from operation513 , to see if he would like some company on the streets and do some witnessing together. He thought that would be a great idea. When I first got off the plane in ChCh, I realised I had not packed any tracts. This is most unusual for me, as my tract folder (an old travel wallet from a travel agent) is usually the first thing I pack. I felt naked without them! Thankfully Glen has an abundant supply, so said he would bring some with him.

Glen also invited me to the weekly evangelism prayer meeting at Andy’s house on the Tuesday night (Andy is also an evangelist for operation513). In this prayer meeting, they pray specifically for the work of the Gospel, both in NZ and around the world. It was an awesome time of prayer and fellowship!

We arranged to meet at Speakers’ Corner, Cathedral Square, on Thursday afternoon. I arrived to a man open-air preaching. I’ve heard Steve a couple of times before. I couldn’t make out exactly what point he was making, and the Gospel was blurred beyond recognition. 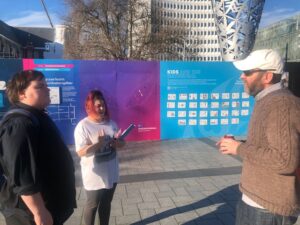 I spotted Glen arriving, and walked over to greet him. A young couple passed us, and Glen recognised the young man, so he engaged with them (left). It turned out that that he was with his best friend (female). He was gay, but was involved with lay ministry at an Anglican Church. Glen took him through the law, but the young man couldn’t reconcile that God saw homosexuality as sin, and said he was a God of love. Apparently lots of LBGT attend his church, and they don’t have a problem with it. He really thought he was in the right. Glen tried to tell him that this is contrary to the Bible. I mentioned 1 Cor 6:9-10 in, telling him that homosexuals will not enter the kingdom of God, along with all the liars and thieves. Glen added verse 11 which says “as such were some of you” – meaning God could save him by taking his hell punishment for him. He didn’t think he needed saving. I asked him if it was possible that he didn’t want to accept the God of the Bible, because he would have to give up the sin he loves – so he accepted a God in his own mind that turned a blind eye on them, and accepted him for who he was. I knew this was exactly what he was doing – breaking the 2nd commandment by creating a god in his own image and cuddling up to it. And I also figured what his response would be – full of self-righteousness and pride. I was right. We parted our ways with Glen pleading with him to read the tracts he gave him. We prayed that God would open their eyes to the truth. 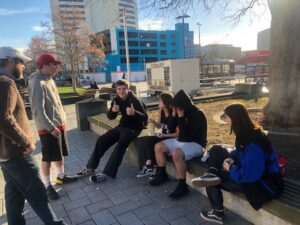 Glen recognised another young man, and went to talk to him. Apparently he has spoken with him a few times. He was very humble and polite with his responses. He had previously indicated that he might come to Glen’s church, and did so again. He was with a group of friends who were vaping, and drinking something out of a vodka bottle. Glen began engaging with the group regarding the proof of how they know God exists. The young man sat down with the group. He joined in with the drinking, and baiting Glen with answers. It was as if as soon as he was with his mates, his true colours came out. The humbleness and politeness disappeared (pictured seated with thumbs up). A couple of girls from the group peeled off, and I took the opportunity to give them a good person test. They started off really engaged, then all the silliness started again, and they walked away laughing. May the Lord have mercy on them all, and grant repentance to them!

We walked over to Cashel St, where we were able to distribute some tracts. While Glen engaged a gentleman, I approached a young lady sitting in the sun, vaping:

Tarsh: I gave her a Good Person Tract. She told me she was a Christian, so I started with some checking questions. She said she knew what sin was, and that Christ had died for them. But she hadn’t been to church, or read he Bible for a number of years. I decided to start from the beginning. She admitted to being a liar, thief, and blasphemer. I asked her if these were some of the things she would be judged for, will she be innocent or guilty? She said guilty. She understood what I was saying, and believed that Christ had forgiven her for these. But there was a disconnect between her words, and her lifestyle. I explained that a Christian who trusted that their sins were forgiven should be wanting to grow in faith and fellowship. She agreed that she wouldn’t go a day without food, so I impressed that as a Christian, she shouldn’t go a day without feeding on God’s Word. She had to get back to work, so I encouraged her to get into the Gospel of John – no read, no feed! 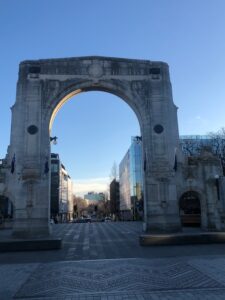 We walked down to the Bridge of Remembrance, where I found lots of people to take tracts, but no one willing to stop and chat. Glen fell into a long conversation with a couple of young men. Afterwards, we walked back to meet with a local Pastor who wanted to do some witnessing with Glen. I had met this gentleman when I came down for the Missions Week in March. It was encouraging to see other willing harvest workers!

We walked back to the Bridge, and I met:

George & George Harrison: These 3 likely lads were laughing and joking together as they walked past. I remember their names, as one of them said his name was Harrison, and the other two were both George…George Harrison! I suspect they may have been messing with me, but it didn’t really matter. I told them that I had a question for them. They stopped and asked what it was. I said “What happens after we die?” They answered with variations like heaven, hell, and reincarnation. I asked if there was a God, and got into a conversation of evolution and the problem of infinite regress. They agreed that someone outside of time must have started everything. I asked them that if this person required us to live to certain expectations, would this person be happy with them? They said it depended on the expectations, so I took them through the law. They all failed miserably. I asked if these were some of the things that God would judge us on, would we be found guilty? They said probably guilty. Heaven or hell? Probably hell. They said were all ex-classmates from Christchurch Boys High School, and had to take religious studies. They remember something about Jesus dying for their sins. I asked them if they believed it was true or not. Suddenly, one of the George’s said they needed to use the bathroom, and they all used that excuse to end the conversation. I asked them to think about what we discussed, and to read the tracts I gave them, and they said they would. I can’t decide if I struck a raw nerve, or they had lost interest. I prayed that they would come to understand the truth that they already know.

I managed to start other conversations, but they too bailed before I got to the good part. It was all a bit frustrating, really, so I just had to rely on the fact that God is the one who changes hearts, not me!

At the end of the outreach, the visiting Pastor lead us in prayer.  It was a great time out, and I pray that all glory will go to God!

You can see Glen’s report on the outreach here.

My week was topped off with a couple of days at the Hanmer Hot Pools, and fellowship at Glen’s church on the Sunday with my mate. Who could ask for more? Next time I’ll bring my (jealous) wife down!!