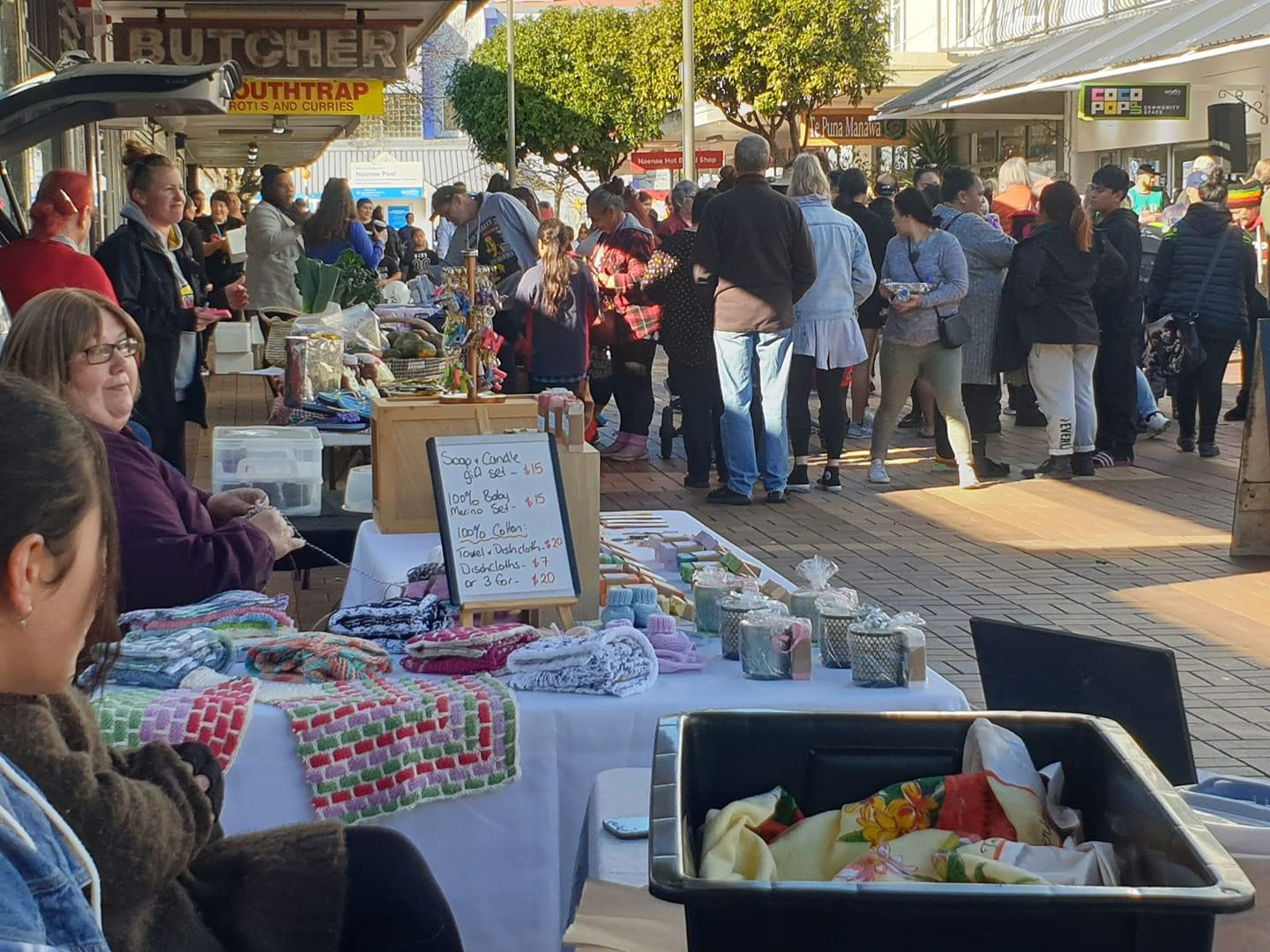 Well, today was our re-scheduled Gone Fishin’ outreach. The day we were supposed to go out (17/7) was interrupted with high winds and torrential rain.

Present today were Pastor Jarryd, Mark & Karen, Mike & Di, Justin, Josh, Royce, Frances, Maree, June, Julie. The reason for the higher than normal turnout was due to it being just after the last session of the Way of the Master Basic Training Course. More about the course in the next Gone Fishin’ Newsletter.

It turned out to be a providential date change, as it dawned beautifully clear and mild, and it coincided with the opening of the Koriri Marae Naenae Hub. There were bouncy castles, rides, and activities for the kids. as well as performances from community cultural groups. All this meant that there was dozens of people out and about to witness to. Due to the late finish of the course, we only had about 90 minutes at the shops.

It was awesome to see the course attendees out attempting Gospel conversations for the first time! Most reported back that they were very nervous, but managed well. I remember well the first time I witnessed one-on-one. I was a nervous wreck, I stammered my way through it. I still get quite nervous now!

Praise God that at least 40-50 people took $1m tracts off me. Most were glad to take one, but were too eager to check out the stalls and rides to have a conversation. There were three, however, that stuck out:

Bailey: This young Maori gentleman was the first person I approached that day. He was very humble, took a tract, and was willing to chat. He said he thought he would go to heaven. I asked him why, and he said he thinks he had earnt it. So I went through the law with him. He admitted to lying, stealing, blaspheming, and adultery. I asked him if these were some of the things he would be judged on, would he be innocent or guilty? He replied guilty. Heaven or hell? Probably hell. So I shared the beautiful Gospel with him, and he was receptive. We kept getting interrupted by friends ringing him. He apologised and said he had arranged to meet people at the market, and they were looking for him. I wanted to make sure he understood what I was saying, so I asked him some checking questions. He got them right, which is a good indication that I was tracking right with the conversation!  He said that he should not leave it too long to repent. I gave him a good person tract that summarised our conversation. He indicated he might come to church, so I gave him our church card with all the details. I get a bit skeptical of people who say they will come to our church, as I haven’t had any that have followed through. I thanked him, and shook his hand. It was a great conversation to start to the outreach!

Shane: I had just watched the haka (a cultural Maori group challenge), when I saw Shane. He took the $1m tract off me and laughed. He asked if it was a Christian thing, and I said it was a Gospel tract. Immediately he went on the offensive (although in a non-confrontational manner), trying to convince me that religion has been the cause of almost every global conflict. I pointed out that the actual figure was around 6%, and that the real reason was probably atheism. He said that was a lie, so I said that was based on others’ research, not mine, and that he should look it up. I asked him if the was a creator. He said no, God was just someone created to make people feel better. So I asked how man got here. I got the big bang answer. This is easy to refute, but not easy for the brainwashed to accept. I asked him where the elements for the big bang originated from. He said he didn’t know. I explained that the problem with the big bang is that it violates the science of cause and effect – science dictates that every effect is from a prior cause. You can keep going back, but you can never prove an origin, because the origin needed a cause. I told him that it needed someone outside of time and space to create a beginning. Naturally he rebuffed this, because the only alternative was God, which he refused to believe in. The conversation was going nowhere, so the best thing I could do was sow some doubt in his mind. I did this by saying that he was putting his trust in something that is logically and scientifically impossible, and to completely rule it out because the alternative is not likeable, is being dishonest to yourself. He accepted a couple of other tracts, and we shook hands.

Keal: A group of 3 were sitting in the sun when I approached them with $1m tracts. I began engaging all 3, but 2 of them suddenly had something else to do, leaving Keal to talk with me. I managed to get through the law with him, and he admitted to lying, stealing, blasphemy, and adultery. He admitted that he would be guilty on judgement day. Everything was tracking nicely with Keal until he asked me a question; “Wait, are you saying that someone who steals to feed his family is treated the same way as someone who steals to feed a drug addiction, by being sent to hell?”. I said “Yes, but…”. He told me very colourfully to get out of his face. I wanted to explain why this was the case, but something had snapped inside him, and he was no longer interested in a polite conversation. Not willing to sacrifice and of my teeth, I backed away from him. Marie joined me, and I warned her not to approach him. As I was speaking to her, he was yelling out “Don’t talk to that <expletive>, he will tell you you’re going to hell for telling one lie! Fancy saying that God will send someone to hell for stealing to feed his family. What a <expletive>!”. As it was at the end of the outreach, we had all gathered to share our experiences. He was still in the background screaming, and giving me the fingers. Please pray for Keal!

The others, including those on the Basic Training Course, had mixed experiences as well, which is good, because it taught them that not every Gospel encounter goes to script. Many people were given tracts or spoken to that day!

It was an awesome day out, and I pray that God will bless each tract and conversation, to His glory!