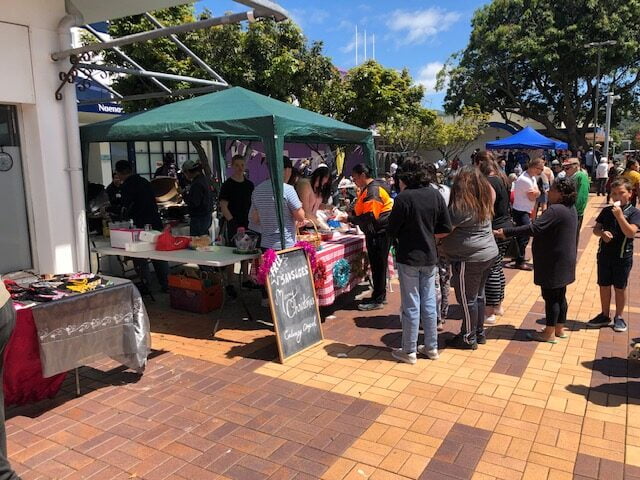 Today (28/11/20) was the Naenae Christmas Market down at Hilary Court. As per the last couple of years, Calvary Chapel were invited to have a stall. It is a good chance for the wider fellowship to be involved in Gospel Outreach. 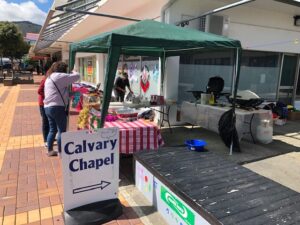 It had been raining cats and dogs the couple of days leading up to the day, causing widespread flooding in the greater Wellington area.  We prayed for fine weather, and the Lord was good to us, providentially parting the clouds about an hour before we arrived!

There were the usual market stalls (fruit and vegetables, food items). But there were also other merchants, selling their wares. There were singers and dancers from various community groups in the area. It really was a nice festive occasion. 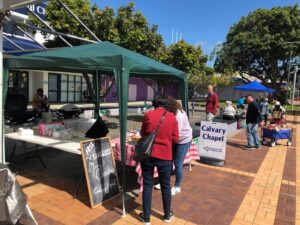 We fired up a couple of BBQ’s, and rolled out a seemingly endless supply of sausages. These we handed out on bread free with a gift pack, consisting of a Christmas-related Bible verse, a small Gospel tract leaflet, and a card with information on Calvary Chapel Wellington.

In addition to this, we had people walking around passing out other packs, which included all the above, plus a small bar of Whittakers chocolate, which proved to be a real drawcard! 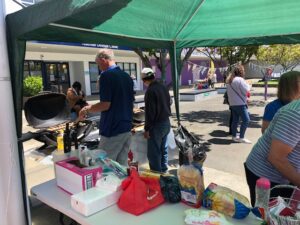 It was heartening to see others in our fellowship that don’t normally come out with us, mixing and mingling. Some were manning the BBQ or distributing the sausages, some passing out the tracts and striking up Gospel conversations. Regardless, as long as the Gospel was going out, evangelism was being done!

I filled up my bag numerous times with the gift bags, and had lots of Gospel conversations. Here’s just a few that stand out:

I gave Natalie a gift bag, and asked her if she believed she would go to heaven when she died. She said she didn’t know, so I went through some of the 10 Commandments with her. She admitted to breaking a few of them. I told her the bad news that God will judge her for them, find her guilty, and sadly would send her to hell. Natalie said she was Maori, and traditionally followed the customs of the mythological Maori gods Ranginui (sky father), and Papatuanuku (earth mother) and their descendants. However, she agreed to hear the good news of the Gospel. She was very open and pleasant. She agreed to read the tracts in the pack afterwards.

Outside the old Post Office, Damian took a pack. I asked him if he knew the true meaning of Christmas. He said it was when Jesus was born. He said he knew all about it. He used to go to church, but when his sister died of illness at a young age, he vowed to never step foot into a church again. He seemed quite melancholic, so I asked him  where he thought his sister was now. He said he didn’t know, but hoped it was heaven. So then I switched the focus to him by asking “What about you – where are you going?”. He again said he didn’t know, but hopefully heaven. I gently took him through the law, not trying to be too blunt with him. He came to realise that he would be in trouble on Judgement Day. I then told him how he could find forgiveness through repentance and faith in Christ. He started blinking and wiping back tears. I asked him to read the tracts in the pack, and also the Gospel of John. I encouraged him to move through his sorrow, and ensure it would lead to repentance at the foot of the cross. He agreed he would, and we parted with a man-hug.

Bob was a real hard case. When I offered him a pack, his eyes lit up when he saw the Whittakers chocolate. He told me he used to work at the Whittakers factory in Porirua for years. I jokingly asked if it was in quality control. He laughed and said no, but he hoped we didn’t pay for the chocolates, as Whittakers like giving boxes away for events and fundraisers. I said I didn’t know, as I wasn’t the one who put the packs together. I asked him what he knew about Christmas. He gave me the secular answer about family, togetherness, and unity. He was walking away while saying it, so I asked him to please read the information in the gift pack to learn the real meaning of Christmas. He said he definitely would. I said that if he was sick of Whittakers, I could take it off his hands for him. He said “Not likely, mate!”.

I passed a gift pack to Richard and Alofa, which they received with thanks. When I asked them if they knew what Christmas was all about, they said it was when Jesus was born. I asked them why Jesus was sent to earth. They said they honestly didn’t know. I gave them the full account of Adam & Eve bringing sin into the world, and God sending His Son into the world to redeem us from the curse of the law. I went through the law with them, and they admitted to being liars, thieves, and blasphemers. I explained that when they died, they would have to face God, and will be held accountable for these sins. They answered by asking me “Isn’t God a forgiving God?”. So I went through the courtroom analogy – would they expect a judge to just forgive them for robbing a bank? They saw my point. So then I gave them the good news of the Gospel. They were very receptive. I asked them to read the Gospel tract, and also the Gospel of John in the Bible. They said they would.

My last memorable conversation of the day was with a Maori gentleman named Andrew. It was quite surreal, and I left scratching my head, not really understanding just what happened. I had run out of gift packs, so gave Andrew a Christmas $1m tract. He said wow, and asked me for some more to give to his whanau. When this happens, I usually let them have as many as they want – the Gospel works the same way regardless of who delivers the message!  He pulled all but one of the tracts out, and put them in his pocket. I asked him the million dollar question on the back – what happens after we die? He said something like “It’s OK, my daughter is the gatekeeper. She will let me in”. I had no idea what he was talking about, so I asked “Is your daughter still alive?” He said yes, but she was going to go before him and make sure that he got through the gates. This was a new one on me, I’ve never had that sort of response before! I asked him if he thought he was good enough to get to heaven. He said probably not. So I went through the law with him. He admitted to lying, stealing, blasphemy and adultery. I asked him if those were some of the things God would judge him for, would he make it to heaven? He said probably not, but his daughter would let him in at the gate. I couldn’t tell if he was being serious, or deliberately trying to wind me up. So I decided to go hardball on him. I said “Andrew, look at me. Listen, you are a sinner, just like me. When you die, you will have to face God for those sins. Alone, with no one else to help you out. His standard is perfection, so He will find you guilty of breaking His laws. Your punishment will be an eternity in a fiery lake called hell. No one will rescue you – not your daughter, or your clever wit. But Andrew, God made a way so that guilty sinners don’t have to go to hell. Do you want to know what that was?”. He thought about it for a while and said “Nah, I’ll be fine, my daughter is the gatekeeper. She will let me in”. I decided to let it go. I gave him some good person test tracts, and asked him to read it all. He said he would, and left. 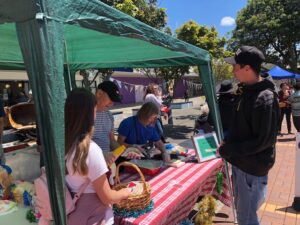 After that long conversation, I was physically and emotionally spent.  I went back to our stall to help pack up. Others spoke of wonderful Gospel conversations and the great time they had. 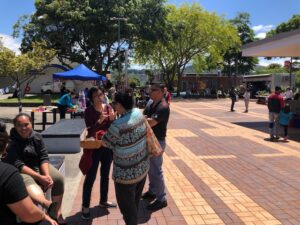 It really was a good day – well, it felt like a whole day, but it was only about 4.5 hours long, including set up and pack down! I can’t wait to do it all again next year, alongside my Calvary Chapel Wellington whanau. A great big thank you to all who turned out. Your efforts were truly appreciated, and the Word that went out will not return void!

Please keep Natalie, Damian, Bob, Richard and Alofa, and Andrew in your prayers.

Also pray  for all others that the team spoke to, or received the gift packs.

And lastly, pray for more workers to gather the harvest!