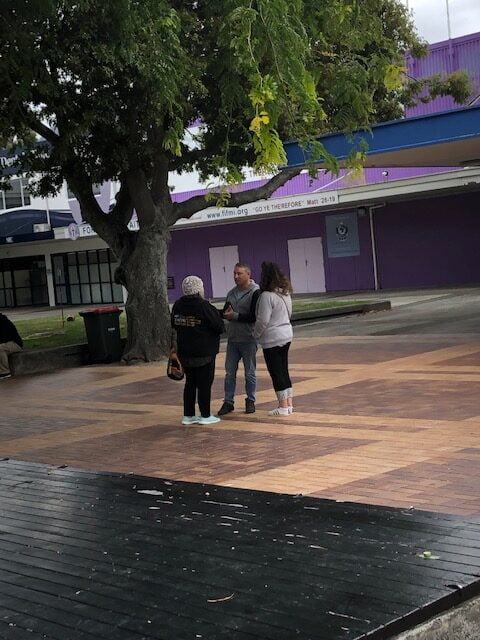 Well it was an overcast start to the day today. Seems Autumn is finally starting to win the battle of the seasons!

I opened with the first portion of the Lord’s Prayer:

In this manner, therefore, pray: Our Father in heaven, Hallowed be Your name. Your kingdom come. Your will be done On earth as it is in heaven. (Matt 6:9-10).

I spoke of God’s Kingdom coming to earth every time his Gospel is proclaimed. We also touched on the fact that asking God to do His will always results in a “Yes!” answer from Him. This is because regardless of what we do, the Lord will always carry out His will. So asking Him to do His will is not so much giving Him permission, but more to do with us being obedient, and bending to His will. This also releases our obligation to convert someone, because His will may not be for that person to be saved – at all, or at that particular time. We just need to be obedient to the Great Commission, and leave them in God’s hands.

There weren’t a lot of people down at the market, but enough to keep us busy!

I turned the corner to see a Pacific Island lady sitting on the seats outside the library. I offered her a million dollar tract, and she laughed, and wanted it to be real. However, when I asked the million dollar question she went “oooh”, and the smile quickly subsided. She thought she was good, and hoped she had done enough to get to heaven. However. she admitted to lying, stealing, and not loving God perfectly, 100% of the time. When I asked her if those were some of the things she would be judged on, she said she would be guilty. Heaven or hell? Hell, she said. Did that concern her? Yes, it did. So I gave her the beautiful Gospel. She was smiling warmly, and nodding all through it. It was a privilege to watch the change in her face. When she said she would definitely read the Gospel of John, I gave her some more tracts and said goodbye. I wish all outreaches started that way!

Just up from Lani I saw Graham sitting at the taxi stand, waiting for his ride. He gladly took a tract, and looked like he was eager to chat. He used to be heavily involved in sports, but now he works as a security guard.  He said he had been a ratbag in his time. Has he lied? Yep, hundreds of thousands. Stolen? Yep, whatever he could lay his hands on. Blasphemed? Not any more, but he used to have a wayward tongue. Before I could ask another question, Graham said he would go to hell. This concerned him, so I shared the beautiful gospel with him as well. He as waving the million dollar bill around, and someone from behind him yelled out. It was Katrina. She said “I know what that is. It’s a million dollars! Someone talked to me also!” I gave her the thumbs up, and turned my attention back to Graham. He said he needed to get his life right. I said he needed to transfer his trust from himself to Christ, who took his hell punishment for him. He said he would. Just then his taxi turned up, so I gave him a couple of other tracts and a Gospel of John to read. Oh Lord, please draw him to You!

Josh asked me if he could team up, as he was handing out tracts, and was not good at striking up conversations, and wanted some pointers. So we walked around the corner together, and we met Pipi, with her 3 children. She took a million dollar tract off me. Her kids all said “Wow!”. I asked her the million dollar question, and as per usual, she didn’t know if she would get to heaven, but hoped she had done enough to make it. She admitted to lying, stealing, and blasphemy. She said she would be forgiven by God. The courtroom analogy put her right – she would not be able to bribe the judge. So she said she would go to hell. She didn’t want to, so I told her of the beautiful sacrifice Christ made for her, paying her fine. She was guilty, but free to go because of what God had done for her. She nodded, took it all in. When I asked her when she would transfer her trust to Christ and not her good works, she said “Maybe soon”. I gave her a Gospel of John also. I thanked her kids for being quiet while I talked with their mum.

Afterwards, Josh said I was a natural, but I’m not really. I’m just an introvert who managed to find a way to talk to people. It just takes practice. And the more you practice, the better you get at it!

In front of the old Naenae Tavern, I gave a tract to an Indian Sikh man. I asked the million dollar question, and he asked “Where’s your proof that God exists?”. I gave him the building / builder – funnily enough using the Sikh temple across the road – and the painting / painter analogy to point out that creation is proof of a creator. He thought about it, and nodded in agreement. He said he had to go back to work. He walked into the tavern that was being refurbished. I saw paint on his back and on his turbin. It turned out he was a painter! Isn’t it funny how God steers your conversation sometimes!

We met Kirk on his break. He wondered what the million dollar tract was for. When I told him, he said he was a Christian. He worked at the coffee shop on the corner, which helped employing people who were down on their luck. He didn’t really appreciate the ‘blunt’ approach we were using in evangelism. He was more accustomed to ‘meeting their needs’. I said that their greatest need was for a saviour. I have met these sorts of people before, and it was one of those conversations that was going to go nowhere, so I shook his hand, wished him well and said I would pray for him. He was having major surgery this week.

The others were leaving by then. Mike said that Katrina goes to St Mathews once a month, and is a recovering drug addict. She was very open to the gospel, and said she might come to our church. He also spoke to Adrian, who manages the setup of the stalls. He said he was living a moral life. He heard the Gospel, but wasn’t really convinced.

So it was an awesome day out fishing! May God receive all the glory for all we did and said!

Next time out is our big Easter Outreach on 3 April!