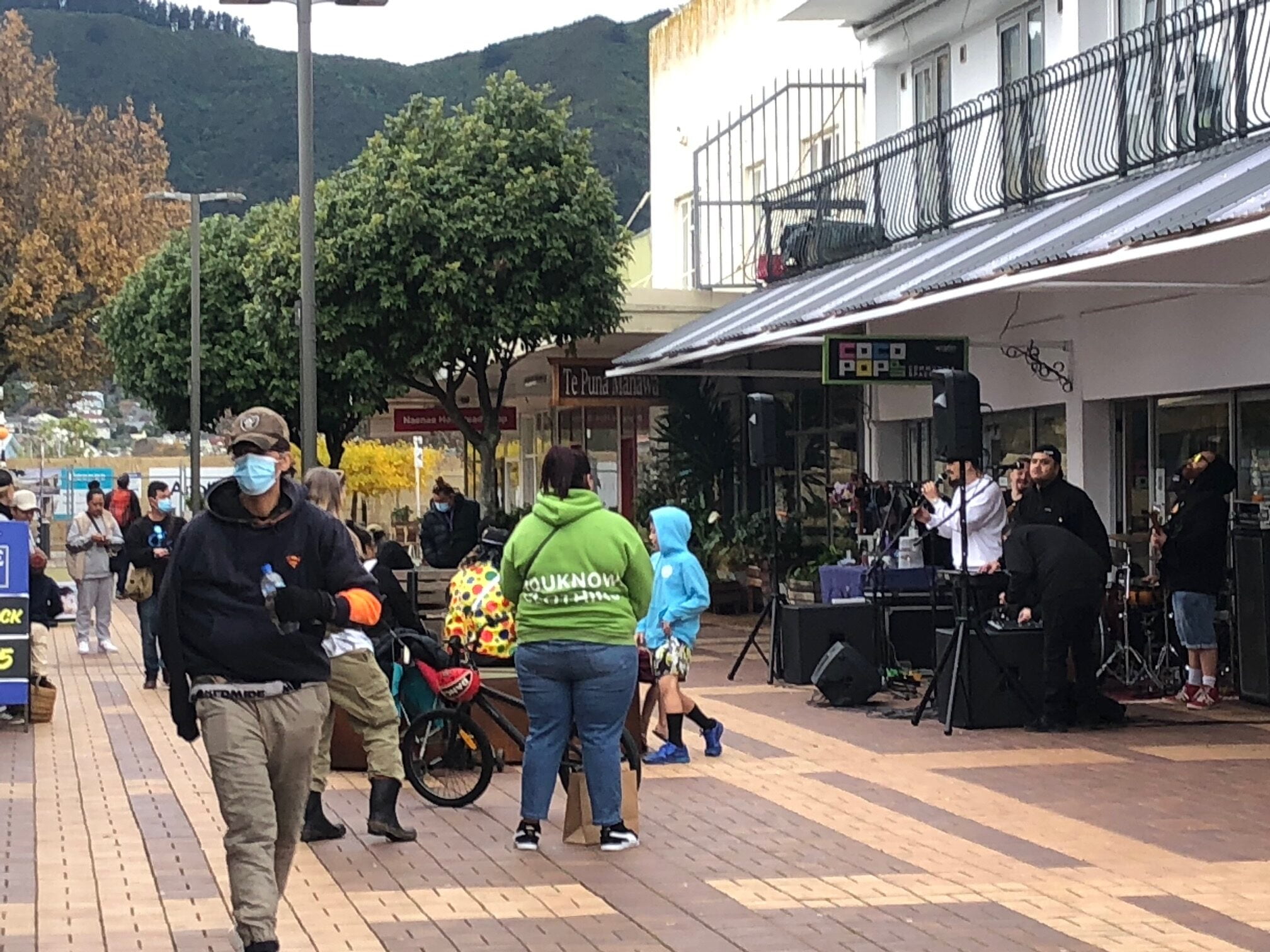 I opened with the calling of Jeremiah:

“Then the word of the LORD came to me, saying: “Before I formed you in the womb I knew you; Before you were born I sanctified you; I ordained you a prophet to the nations.” Then said I: “Ah, Lord GOD! Behold, I cannot speak, for I am a youth.” But the LORD said to me: “Do not say, ‘I am a youth,’ For you shall go to all to whom I send you, And whatever I command you, you shall speak. Do not be afraid of their faces, For I am with you to deliver you,” says the LORD. Then the LORD put forth His hand and touched my mouth, and the LORD said to me: “Behold, I have put My words in your mouth. See, I have this day set you over the nations and over the kingdoms, To root out and to pull down, To destroy and to throw down, To build and to plant.” (Jer 1:4-10)”

I spoke about a couple of excuses we can dream up when it comes to fulfilling the great commission:

Our age – Jeremiah complained he was too young, but most scholars place him around the age of 30, the same age Jesus was when He started His ministry. We are never too young or too old to be obedient to the great commission. We have a call to serve God if in all seasons of our life. Age should never be an excuse!

Our articulation – Jeremiah complained that the message was too hard to speak. The Gospel can be so offensive, that it can be scary to speak. But Jeremiah did not have to use his own words, as God put the words in Jeremiah’s mouth. When we talk to others, we have the words of life – not ours, but the glorious truth of the Gospel. As long as we stick to that, we let God do the rest of the work.

It was an overcast day. Rain was threatening, but by God’s providence, it held off until the end of the outreach! When I arrived at the market, Peck was already in conversation with a someone, and the team were setting up the table. 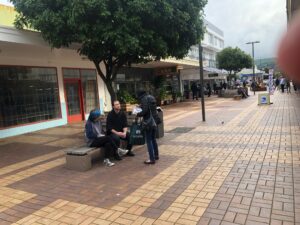 This is the first time we have used a stall at the market outside of Easter & Christmas, so we were interested how we would fare. The table had all our tracts, as well as New Testaments to give away.

I let the team set up, and went searching for someone to talk to. I didn’t have to go far before I saw Sala & Buchanan sitting, talking together. I offered them million dollar tracts, which they thought were a hoot. I asked them where they would go when they died. They both thought heaven, because they said they were good. I took them through the law. They joked through it with their hearty laughs when I told them they were lying thieves. But when I told them that God would not hold them guiltless who use His name in vain, they started to understand the seriousness of it all. When I said they were lying thieves and blaspheming adulterers they again laughed, but understood that they were in bad trouble on Judgement Day. They thought God would forgive them, but the judge/courtroom analogy soon put paid to that. I then asked what God did so that they didn’t have to go to hell. They said He sent Jesus to die, but they didn’t really know what that meant. So I went through the Gospel with them, explaining that they broke the law, and Jesus paid the hell fine for them, and placing their faith in Jesus, instead of our own goodness (which they don’t have) means they will go to heaven. They had Bibles at home, and said they would read the Gospel of John. We shook hands before I went back to the table. It was an awesome encounter to start the outreach. Please pray for Sala & Buchanan! 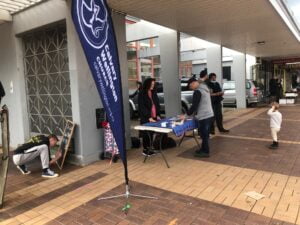 Isaac asked if he could tag along with me, so we went around handing out tracts, trying to start conversations. Most took them, but no one wanted to talk.

Then I spotted a young man sitting alone, so I said to Isaac that we should go and talk with him. We found out that his name was Casey. I offered him a tract, and he laughed. I said it came with a million dollar question about what happens after he dies, where would he go, heaven or hell? He said heaven, as he thought he was a good person. I asked him if God asked why he should let him into heaven, what would he say? He said that because he tried to be a good person and do good for other people. I asked if he wanted to take a test to see how good he was, and he agreed to do it. It turned out he was a liar, a thief, and a blaspheming adulterer at heart. I asked him if he ever used his mother’s name as a cuss word. He said he would never do that out of respect. I said “But you’ve taken the name of the God who gave you your mother, and substituted it for a filth word. God said he would not hold anyone guiltless who uses His name in vain”. He said “Oh”.

I asked “so Casey, if these were some of the things you were judged for, would you be innocent or guilty?” He said “Guilty”. I asked “Heaven or hell?” He said “Hell”. I asked “Does it concern you that God would send you straight to hell for breaking His laws?”. He said “Yeah, a little bit, but wouldn’t God forgive me?”. For the second time that day I gave the courtroom analogy, that a judge that forgave him for a serious crime would be a corrupt one, so he couldn’t just be forgiven. But if someone ran into the courtroom, saying they loved Casey so much that he sold everything to pay the fine for him, the judge could legally let him go. He would still be guilty, but the fine is paid, so he was free to go. I told him that was what Jesus did for him. He was guilty of breaking the law, and the penalty was an everlasting hell punishment. But Jesus paid his hell fine for him. I showed him the back page of the Good Person tract, where Jesus was protecting him from the fiery hell punishment. I asked him what would happen if Jesus wasn’t there? He said he would face the fire. “So what is the only reason you wouldn’t go to hell?”. He replied “Because Jesus blocked my hell punishment”. I asked him if he believed that, and he said “Yes”. Isaac went to grab a New Testament from the table. When he came back I urged him to read it as if his eternity relied on it .Then I prayed with Casey, that God would grant him repentance, and that he would 100% trust that Jesus took his hell punishment. We all shook hands, and Casey left with the tracts and the Bible. It was a great conversation, and confidence-builder for Isaac and myself, even though God got all the glory!

I passed June, who said she had a conversation with a Catholic man. Unfortunately it turned into a back-and-forth regarding good works. I have encountered people like this. It can be so frustrating when the wall can be so hard to break down. We can only pray that the tracts he took will cause repentance in him.

There were 4 guys hanging around outside the butchers’ shop. They all looked like seasoned rockers. I gave them all tracts, but they were all pretty resistant to what I was saying. They said they would read the tracts, but didn’t want to talk. Later I realised they were part of the music for the day (see on the right on the picture below). They were pretty good! 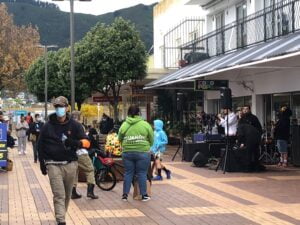 I also had a conversation with a gentleman named Ferlin. I knew his name because I recorded it in my phone, so that I remember to pray for peoiple, and also to personalise it for these reports. The only thing I can recall from the conversation was him saying “My name’s Ferlin, like Berlin, but with an F”. Everything else regarding the conversation is blank. I pray that whatever I said or gave Ferlin would cause him to respond to the Gospel with repentance!

Around the back of the shops, I ran into someone open-air preaching! Were they good? Were they biblical? You’ll have to wait until the next newsletter to find out!

Overall it was an awesome day out. Having the table was a bonus, giving us a central point to work from. However, we have since learnt that due to the feedback from the market, we can no longer have a stall there, due to our “guilt-based approach of our materials not fitting in with the kaupapa (principle/policy) of the market”. I am disappointed with this, but not really surprised. The definition of ‘tolerance’ these days has been twisted to mean ‘we accept any view apart from the Christian one’. We will need to re-evaluate how we run our outreaches in future. Please continue to hold the Gone Fishin’ Ministry up in prayer!