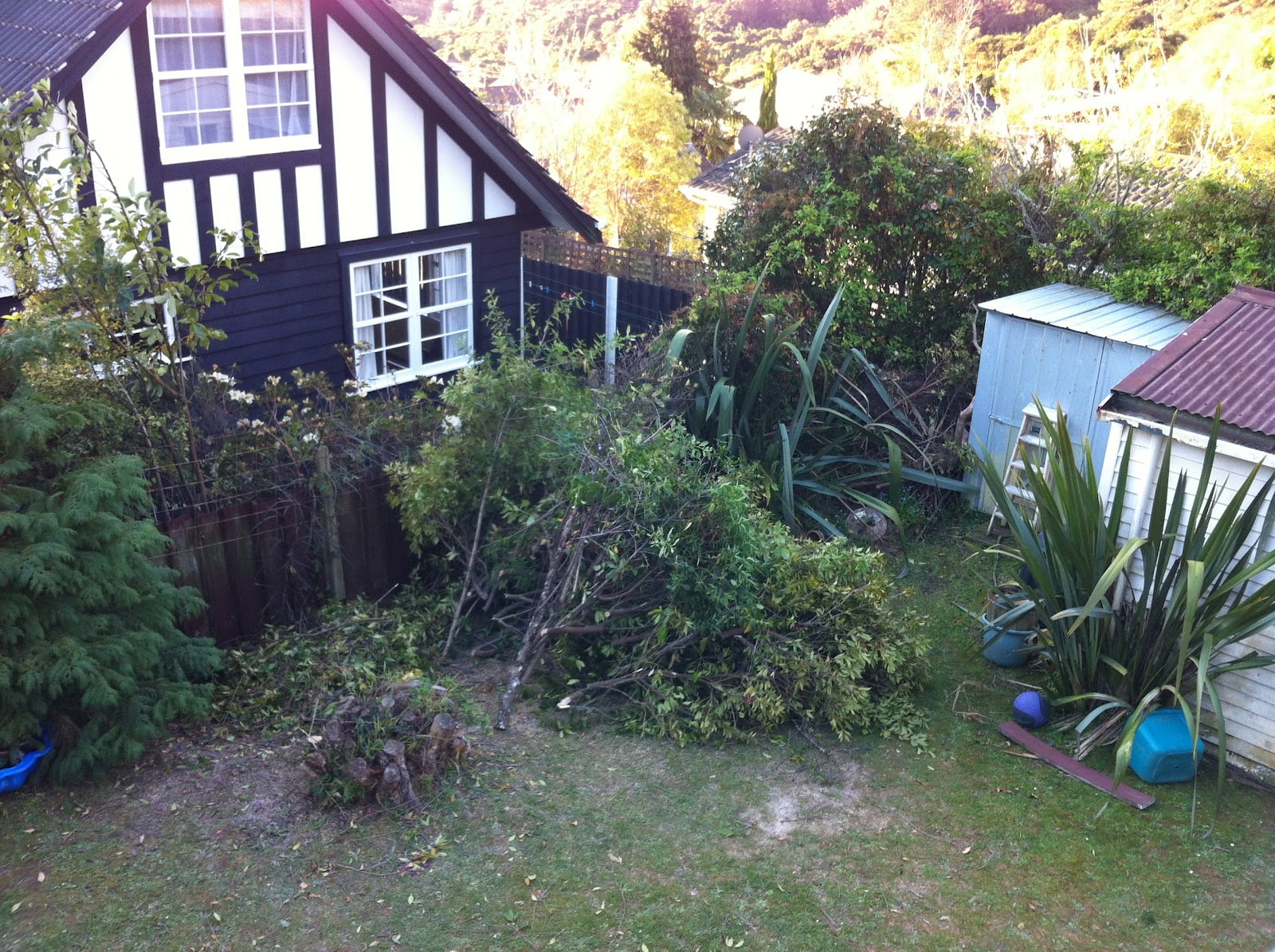 The first was trapping light from our neighbours front window. The neighbours’ father offered to bring over his chainsaw and do the job.
So last Sunday he came over. Being a former volunteer firefighter, he had all the garb – safety helmet, ear muffs, gloves, and strops (tie-down straps) for pulling the branches in the correct direction.

﻿
He was all suited up ready to go. Then, without a word of a lie, the second he put his foot on the ladder, the heavens opened up. Boy was the rain heavy! We struggled on through, getting cold and soaked to the skin – well at least I was – he was fine in his rainproof overalls! We then made a trip to the refuse station to dispose of the evidence. It was all a good days’ work, and we were laughing about it later when the sun came out again. Thanks Brian!
﻿﻿
Last Saturday my friend Dave turned up out of the blue. He asked “where’s that tree you wanted cutting down?”. So, thinking quick, I pointed him to another one I had my eye on cutting back, as it was blocking the light from our back yard, stopping the ground drying out.
He also had all the garb for the job – he has worked on cranes at construction sites, so knows all about safety, and having the right gear.
﻿﻿﻿﻿﻿

﻿﻿﻿﻿﻿So he set everything up, climbed up the ladder, and…

﻿﻿…nope, this time there wasn’t any rain. In fact there wasn’t even a cloud in the sky, – it was nice and warm, and with no wind. We managed to get the job done and clean up the mess in a couple of hours. Thanks Dave!

You know, there are always times in your life when you just need to have a big cleanout – jobs you have been putting off for a long, long time, but the time has finally come say ‘enough is enough already!’

You may be swayed by circumstances around you as an excuse to grumble, give up, and put the job off again. But believe me when I say that if you persevere through those times, the reward feels greater afterwards! The world may be watching us, and it is important to be seen to be honouring our God through our stewardship.

I have found that the best antidote for procrastination is repentance – a bitter pill that both hardens the exterior, and softens the heart at the same time.

“Do all things without complaining and disputing,  that you may become blameless and harmless, children of God without fault in the midst of a crooked and perverse generation, among whom you shine as lights in the world…” Philippians 2:14-15.

A Simple Prayer of Repentance

The Day The Town Came To See The Circus