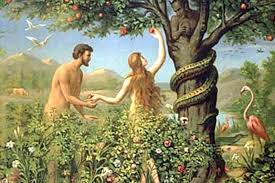 Littered throughout scripture are seemingly mundane stories and statements that we scratch our head at and wonder “Why is that in the Bible?”.

But when we do a bit of digging and scratching around, we can uncover precious Gospel nuggets, evidence of God’s plan of salvation for mankind.


We start with the first mention of hope in the Bible.
Well, I guess if you think about it, you could probably call creation itself the first hope, but that was prior to us screwing things up. Things would have been fine if Adam was content with his relationship with God.
The hope I am referring to here is hope for mercy and salvation after we screw it up.

We all know the lead-up story, but let’s get some perspective by reading from the beginning of chapter 3 when Eve was in the garden:

Now the serpent was more cunning than any beast of the field which the Lord God had made. And he said to the woman, “Has God indeed said, ‘You shall not eat of every tree of the garden’?”
2 And the woman said to the serpent, “We may eat the fruit of the trees of the garden; 3 but of the fruit of the tree which is in the midst of the garden, God has said, ‘You shall not eat it, nor shall you touch it, lest you die.’”
4 Then the serpent said to the woman, “You will not surely die. 5 For God knows that in the day you eat of it your eyes will be opened, and you will be like God, knowing good and evil.”
6 So when the woman saw that the tree was good for food, that it was pleasant to the eyes, and a tree desirable to make one wise, she took of its fruit and ate. She also gave to her husband with her, and he ate. 7 Then the eyes of both of them were opened, and they knew that they were naked; and they sewed fig leaves together and made themselves coverings.
8 And they heard the sound of the Lord God walking in the garden in the cool of the day, and Adam and his wife hid themselves from the presence of the Lord God among the trees of the garden.
9 Then the Lord God called to Adam and said to him, “Where are you?”
10 So he said, “I heard Your voice in the garden, and I was afraid because I was naked; and I hid myself.”
11 And He said, “Who told you that you were naked? Have you eaten from the tree of which I commanded you that you should not eat?”
12 Then the man said, “The woman whom You gave to be with me, she gave me of the tree, and I ate.”
13 And the Lord God said to the woman, “What is this you have done?”
The woman said, “The serpent deceived me, and I ate.”14 So the Lord God said to the serpent:

It is interesting to note that straight after Eve was created from Adam, we read about the temptation in the garden. We do not know if it happens immediately, but we could surmise that Satan did not mess around waiting to take his opportunity.
And he goes straight for the jugular first off – he exposes Eve’s (and mankind’s) most fallible flaw – PRIDE. In stroking her pride, he gave Eve exactly what she wanted – self-control, while at the same time getting exactly what he wanted – an ally against God.
He did not have to do the same to Adam, as he took the fruit without any persuasion whatsoever – probably out of fear of being separated from Eve. Also, he saw no immediate consequence to her actions, because their eyes were not opened until after he ate as well. This is true for us also – if we could see or feel immediate repercussions to sinfulness, we would think twice about committing them. However, that was not an excuse for Adam, and it is not an excuse for us either.

Then they heard the sound of the Lord in the garden. Again, we do not know if this was immediately after, but we can guess that this was the case, as God would have known straight away what would have happened. In fact, as God knows the beginning from the end, He would have known what was going to happen anyway – but that’s another study!
They hid from God because their nakedness was exposed. Their eyes were opened alright – opened to how vulnerable they were. They covered up their physical nakedness, but their newly defiled hearts were laid bare for all to see. They could try, but they could not fool God.

God then asks three questions that He already knew the answer to:
“Where are you?”
“Who told you that you were naked…have you eaten from the tree…?”
“What is this you have done?”.
He offered them three opportunities to repent, but instead they gave Him three excuses:
“I was afraid because I was naked and I hid myself”
“The woman whom You gave…gave it to me”
“The serpent deceived me and I ate”.

The seed of pride that Satan sown in them had now blossomed fully into self-righteousness.

God now turns His attention and anger towards Satan. Note that God did not ask Satan why he did this, as He did Eve – I guess this sort of behaviour was to be expected from an already fallen creature.
“Because you have done this, you are cursed more than all cattle, And more than every beast of the field”
Cattle forage for their food. They do not have the capacity to hunt or kill – this was never needed prior to this point anyway, as death did not enter the world until Adam and Eve ate the fruit. But at least they could eat standing up, being able to see where their next mouthful of food will come from.

“on your belly you shall go, And you shall eat dust all the days of your life.”
How ironic that he was consigned to grovel in the very dust that God used to form Adam. He will forever be foraging on his belly in this dust, relying on his sense of smell for food rather than his eyes. The door to sin and death had now been opened, and the snake makes the most of this by being able to poison and devour his food.

“And I will put enmity between you and the woman, And between your seed and her Seed”
Now, there’s a word you don’t hear very often – enmity – Strong’s Hebrew ‘ay-baw’. Literally translated as ‘hatred’. Webster Dictionary defines it as:
“1. The quality of being an enemy; the opposite of friendship; ill will; hatred; unfriendly dispositions; malevolence. It expresses more than aversion and less than malice, and differs from displeasure in denoting a fixed or rooted hatred, whereas displeasure is more transient.
2 . A state of opposition.”
The relationship between God and man had been forever tainted; punishment for man was a struggle to maintain and keep his relationship with God, as well as a struggle for life itself – due to a divinely placed conflict between himself and Satan through all generations.
[Just as a side note, this makes nonsense of some teaching that implores us to ‘rebuke and bind’ Satan to stay away from us and leave us alone. If God has promised to put us in a constant state of war with him, how silly we are we to then demand Him to keep him away from us. We would do better to run and hide under His wings and let Him do the fighting for us.
Check out my post Whom Shall I Fear for more on this]


“He shall bruise your head, and you shall bruise His heel.”
Here is where God reveals His glorious master plan. Note the syntax of the words: “between your seed and her Seed“, “He shall bruise your head, and you shall bruise His heel. The capitalisation of particular words is deliberate. This is to identify the difference to man’s and God’s ownership.
Eve’s ‘seed’ is the offspring of carnal man, to which everyone on earth is born from. It is tainted with their sin and rebellion.
The ‘Seed’ is not born of Eve, as Mary was a virgin impregnated by the Holy Spirit, and refers directly to the Son of God himself.
“He” will ultimately bruise the head of Satan, meaning he will be crushed, and no longer have any lordship or headship over man.
“you” will only be able to bruise His heel, meaning Satan’s attempt at killing the “Seed” will only amount to a crushing victory over him.

There are much deeper theological explanations to go into regarding these verses, but I think you get the picture!

So in conclusion: wherever you are; when you wake up on Christmas morning, and thank God for sending His Son Jesus into the world, born of a virgin, and giving up His life on our behalf to restore our relationshiop with our creator…

…remember that this was all part of God’s wonderful plan as laid out before the beginning of creation.

Have an awesome Christmas everyone!

If you enjoyed this, please consider sharing: