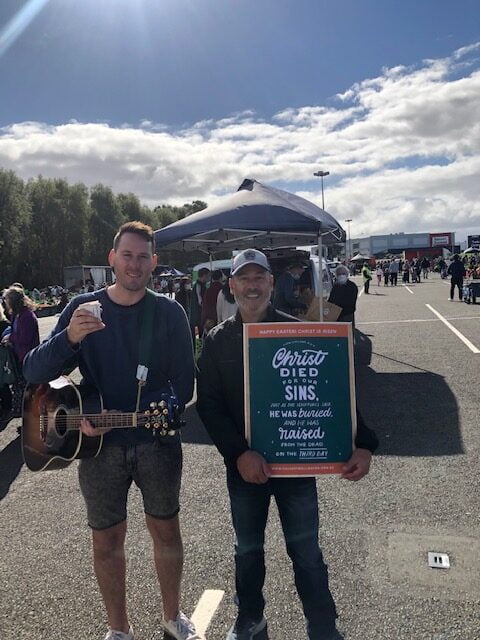 For Easter Outreach this year, we decided to move from our usual fishing hole at the Naenae shops, to the Hutt Riverbank Fruit & Vege Market. The Naenae market is re-starting in May, so we thought we would get a better response at the riverbank.

We had packed 500 hot cross bun packs, and 200 chocolate packs – each with a welcome note from our fellowship at Calvary Wellington, and an Easter tract from operation513.

The weather was a mixed bag. It started breezy and overcast, and we were hit with a few shower squalls. But the sun came out later, which was a blessing!

We had a good turnout from the fellowship – some could only give a short amount of time, but it all added up to having the table covered all the time we were there!

The packs were flying out – most people were very receptive towards them. I made a point of stressing the tracts, saying “this includes the Easter account. Do you know what Easter is all about?”. This was a hook to get them to stop and engage, and possibly lead to a Gospel conversation. Most would say “yes” and not stop and talk, so I just stressed the importance of reading the tract.

Pastor Jarryd sang some appropriate Easter worship songs, and quite a few enjoyed this. It turned out to be a great drawcard to get the tracts out!

Apart from a hard case man named Willy, I couldn’t really get any conversations going.

I asked Willy what he thought Easter was all about, and he said apart from something to do with the church, he didn’t really know. So I went to great pains to explain how man is so sinful that he is doomed for destruction by a righteous God. But He allowed His Son to take the sin of the world upon His shoulders, and that faith in Him meant that man would be spared from hell. He was very appreciative of this news. I said it only means anything if he does something about it. He shook my hand and said he would. I pray he does! Please pray for Willy too! 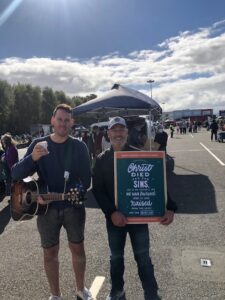 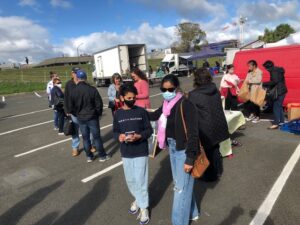 Others of the team spoke of having some good conversations. I think because it was Easter, and we were a church fellowship, most were receptive to hear what we had to say.

The time seemed to fly by, and after the packs were all given away, we packed up.

I decided to stick around a bit longer and do some one-on-one, as I felt a bit frustrated with not being able to get many conversations going. So, armed with my trusty million dollar tracts, I went searching for people to engage with.

I didn’t have to travel too far before I came across two ladies – Michelle, and Taylor. They thought the tracts were a great gimmick. I asked if they thought about what happens after they die. Michelle took over the conversation, and regaled about how our body turns back into dust, but the energy gets expended into the universe, to be used as something else. I asked her where she got this information, and she said from various different religious concepts, along with a dollop of her own imagination. I asked her if she believed in a creator. She said there didn’t need to be one, it was all energy that got transferred into different forms. So I asked her where the energy came from. She didn’t know, but said it had always been there. I pointed to the car park building and asked her how did I know someone created it? She didn’t understand, so I said that the building is proof of a builder. I don’t know the builder, but I know someone built it because the building exists. Buildings don’t create themselves. The same with a painting – I don’t need to know the painter to know that someone painted it, because the painting was proof of a painter. The same applied with creation – I know there was a creator because creation proves it – the building is proof of a builder, the painting is proof of a painter, and creation is proof of a creator. She looked impressed with the reasoning (even though I stole it from Ray Comfort), but I could tell she was rejecting what I was saying. Before she spoke, I asked “Could it be that you don’t want to admit that there was a creator, because it would mean that you would be somewhat indebted to Him?” She asked how did I know it was a him? It was a diversionary tactic, designed to throw me off. I told her it was a strawman response, and I needed her to think logically. That made her mad. She said it was nice to discuss these things with me, but she had to go. They walked off in a huff.

I struck a raw nerve with Michelle. I hadn’t even got to the law with her, in order to see how sinful she was. I think she sensed what was coming, and shut me out. Often self-righteousness is used to curb logic. I could only pray that they read the tract, and that the Lord will use something I said to stir repentance in them! 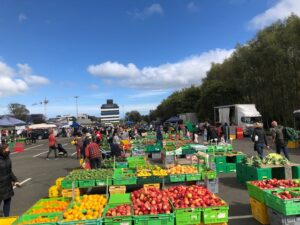 I handed out about 30 million dollar tracts before running out of energy.

I did get to have an awesome conversation with a lady named Yu, but I’ll leave you in suspense until the next newsletter!

So it was an awesome day all round – the Lord was truly lifted up, and we pray as a result he will draw all men (and women) to Him!