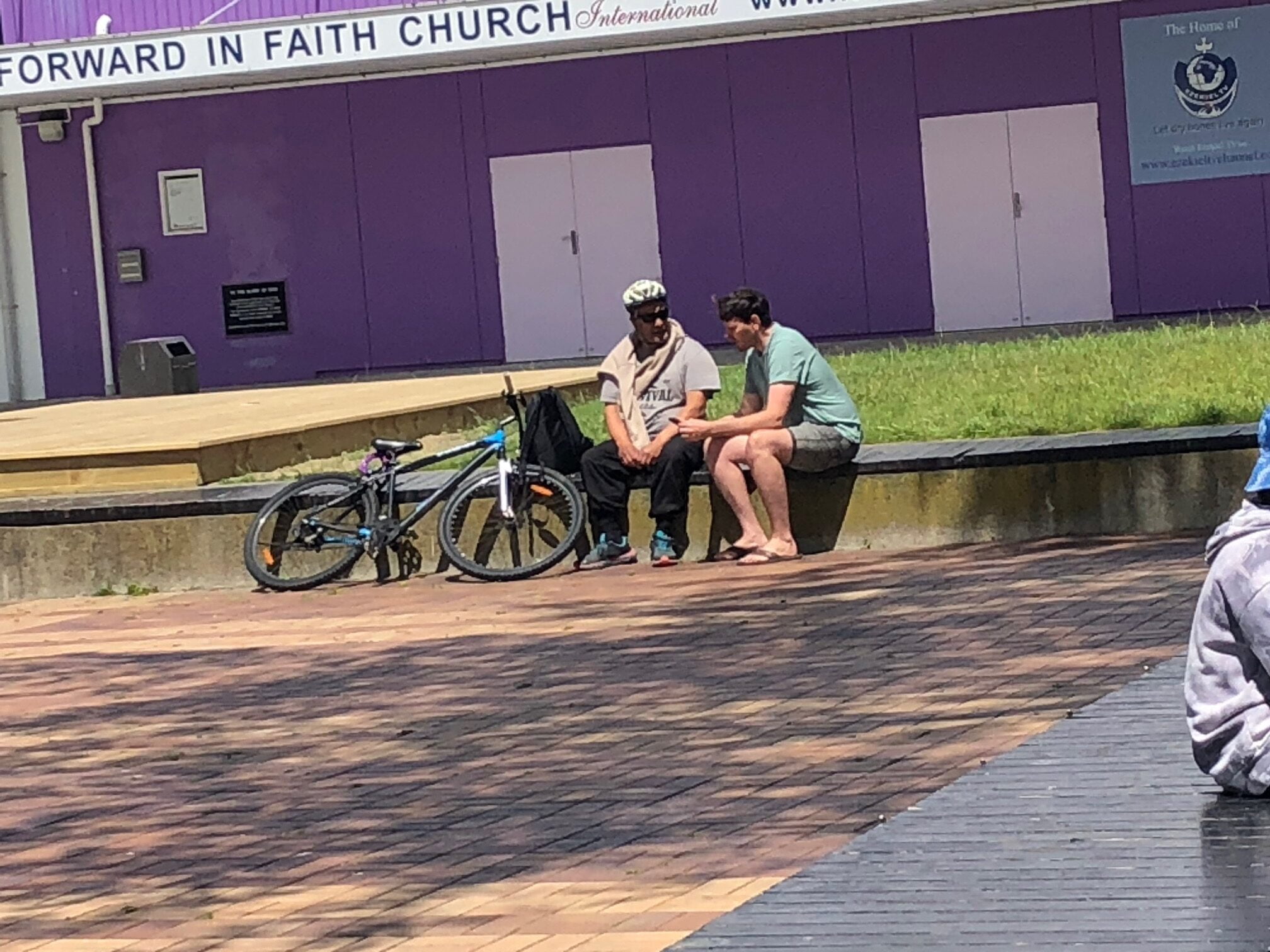 Daniel joined us from another fellowship, eager to come out evangelising, and we were grateful to have him with us!

I opened today with the opening words of Charles Spurgeon’s Gospel Extracts entitled “Jesus Only”:

“Jesus only.” Brethren, it is all the gospel we have to preach, it is all the gospel we want to preach. It is the only ground of confidence which we have for ourselves. It is all the hope we have to set before others. I know that in this age there is an overweening desire for that which has the aspect of being intellectual, deep and novel; and we are often informed that there are to be developments in religion even as in science; and we are despised as being hardly men, certainly not thinking men, if we preach to-day what was preached two hundred years ago. Brethren, we preach to-day what was preached eighteen hundred years ago, and wherein others make alterations they create deformities, and not improvements. We are not ashamed to avow that the old truth of Christ alone is everlasting. All else has gone or shall go, but the gospel towers above the wrecks of time. “Jesus only” remains as the sole topic of our ministry, and we want nothing else.
“Jesus only” shall be our reward. To be with Him where He is, to behold His glory, to be like Him when we shall see Him as He is, we ask no other heaven. No other bliss can our soul conceive of. The Lord grant we may have a fulness of this, and “Jesus only” shall be throughout eternity our delight.

We discussed the importance of keeping Christ front and centre in all we do. This has been the work of the church since the Great Commission, and our charge hasn’t changed since then. Nor should we look to change the message in order to make things easier for ourselves. We prayed for confidence to approach people, and to stay true to the Gospel message. We also prayed for open hearts to receive the message of salvation.

Down at the shops it was a bit quiet, although there were enough people to keep us busy. My million dollar tracts were going like hotcakes as usual, but I couldn’t get anyone to stop and talk. Instead of getting annoyed at it, I resolved myself that if taking a tract was all I accomplished today, then that was fine, as God would still get all the glory!

Peck went straight for the people that lived in the housing around the shops. They often come out to sit in the sun. She has a real heart for them, and they respond well to her. I saw she was talking with one gentleman for a long time. From a distance it looked like it could be a patched gang member, so I stuck around on the sidelines to keep an eye on her. 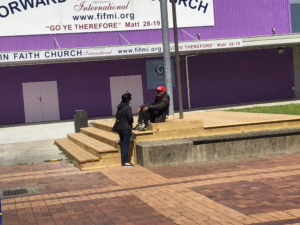 Warren has been meaning to come out with us for a while. He was having a ball passing out tracts, and came across someone who was used to be in the faith unit at Rimutaka Prison. He had become a Christian, and praise God, was now walking closely with the Lord.

I could see Daniel having many conversations. He is very personable and approachable, and people warm to him easily. He said he was able to share the Gospel with many people, with some good results! 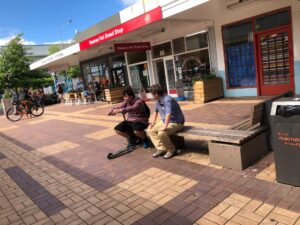 Just when I was wondering if I will ever get anyone to talk with me, I passed a gentleman at the bus stop, who took a tract off me. I asked him what happens after we die, and he said:

“Well, it depends on which religion you adhere to”

“What about you? Which one do you adhere to?”

“I quite like the idea of having 72 virgins” He gave me a double eyebrow raise behind his mask. “I also love the idea of a Nirvana”

“So, where will you go when you die?”

“What about your soul? Where does that go to?”

“Yes, but which one? How do you know how many we have got?”

I could tell I was being drawn into a trap. If I said ‘the Bible says…’, he would say ‘how do you know the Bible is true?’. It could be a deep rabbit hole. But I tried anyway…

“The Bible says that the soul that sins must die. Would you consider yourself a good person?”

“I could find lots of sayings in other books that are more helpful than that. You’re not going to make a lot of friends telling people they are going to hell”. Bingo!

“Are you going to hell?”

“One would hope not. But then again, I could believe that one of my souls would go to hell, but what about the other 16?”

This conversation was drifting into the absurd, so I tried a bit of pre-suppositional apologetics on him:

“That’s a good question. What does it matter what is true or not? As long as it gives you peace”

“If I say that I am a huge Elvis fan, and that when I die, I will go to a big Graceland in the sky singing ‘Love Me Tender’ for eternity. Am I right or wrong?”

Ugh, a post-modern as well! I should also add that all his responses are of a sarcastic nature. He had no intention of having an actual discussion.

“If that’s what you believe”

“OK, say I run a red right. A policeman pulls me over, and gives me a ticket. If I say ‘that light may have seemed red to you, but to me it seemed green. Therefore, you should not give me a ticket’. What would the policeman say to me?”

“That’s a stupid question. No one would say that to a policeman”

“But did the policeman care what colour you thought the light was? No, he was only concerned with the truth. The same thing with God. It doesn’t matter what you believe, only what is true”

“Then you’re being hypocritical to your own worldview, but only when it suits you. Thanks for the conversation”. I reached to shake his hand.

“That’s a shame, I was enjoying that”

“Would you like to hear some real truth? Give me two uninterrupted minutes, and then give me your thoughts”

Instead of asking him 20 questions that he would defer back to me, I gave him the Gospel. I wouldn’t normally share the Gospel to the self-righteous, but I felt it was the only way to get through to him. I went through a few of the commandments – lying, stealing, blaspheming, lusting over 72 virgins. I told him that when he dies he would have to give an account for these sins, and would be found guilty. But even though God will judge him with perfection, He is also merciful. That God made a way so that he doesn’t have to go to hell. He sent His Son Jesus to take his hell punishment for him. I told him that God raised Him from the dead, so He defeated sin and death for us. If we place our faith in Him and not our own goodness, we can be justified for our sins

“That’s very interesting. But what about the other religions? They could be true, too”

“In Christianity, there is a truth claim that none of the others have. Jesus said ‘I am the way, the truth, and the life. No man comes to the Father but through Me’. That points to exclusivity. All other religions are works based – the harder you work, the more chance of going to heaven. Christianity says that no matter how hard you work, you will never get to heaven, because you have a huge sin debt to pay. Only Jesus claims to have paid for your sins. No other god or prophet has done that for you”

“It all makes for a good fairy tale, but you won’t convince me.”

“OK well, once again, thanks for your time. At least think about what I’ve said”

“Probably not, but I needed a good laugh.”

I walked away praying for that man’s hard heart, that God will change it to one of flesh.

When I came back, Pastor Jarryd was deep in conversation with a gentleman. He told me it was a great conversation, with a follow-up. Maree also had some good conversations. 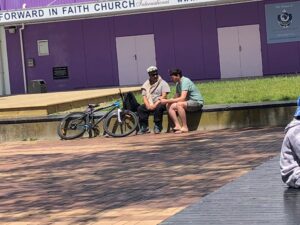 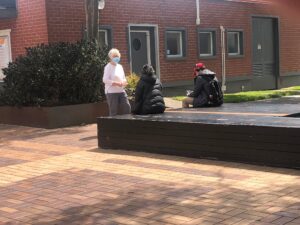 It was an awesome day out, and we thank God for the people He brought across our paths. Whether they responded to the Gospel or not, God still gets all the glory!

By the way, I did do a Gone Fishin’ November Newsletter last week, I just didn’t finish it in time for the mid-week notices! You can read it here.