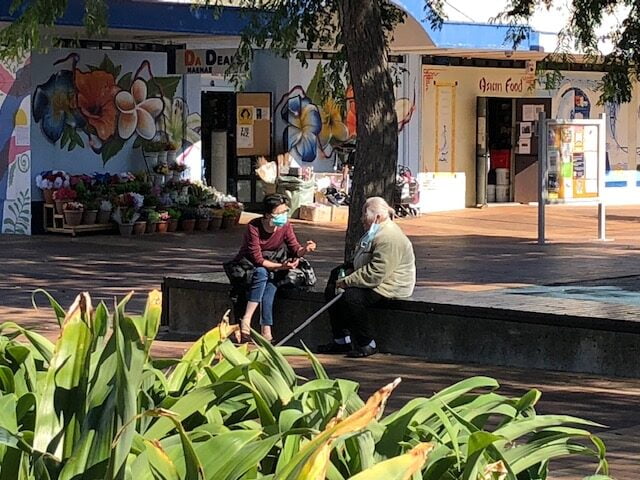 I opened with one of Spurgeon’s ‘Gospel Extracts’, called ‘Judgement Day’:

Laugh at religion now! scoff at Christ now! now that the angels are gathering for the judgment, now that the trumpet sounds exceedingly loud and long, now that the heavens are red with fire, that the great furnace of hell o’erleaps its boundary, and is about to encircle thee in its flame. Now despise religion! Ah, no! I see thee. Now thy stiff knees are bending, now thy bold forehead, for the first time, is covered with hot sweat of trembling, now thine eyes that once were full of scorn are full of tears; thou dost look on Him whom thou didst despise, and thou art weeping for thy sin. O sinner! it will be too late then. Where thou fallest, there thou liest. Where judgment finds thee, there eternity shall leave thee. Time shall be no more when judgment comes; and when time is no more, change is impossible! In eternity there can be no change, no deliverance, no signing of acquittal. Once lost, lost for ever; once damned, damned to all eternity! In hell there is no hope. They have not even the hope of dying—the hope of being annihilated. They are for ever—for ever—for ever—lost! On every chain in hell there is written “for ever.” In the fires, there blazes out the words “for ever.” Up above their heads they read “for ever.” Their eyes are galled, and their hearts are pained with the thought that it is “for ever.” Oh! if I could tell you that hell would one day be burned out, and that those who were lost might be saved, there would be a jubilee in hell at the very thought of it. But it cannot be—they are cast into outer darkness for ever. Oh, bethink you that there is but one hope, and that one hope lost it is gone for ever! Defeated in one battle, a commander attempts another, and hopes that he may yet win the campaign. Your life is your own fight, and if it is lost, it is lost for ever. The man who was bankrupt yesterday commences in business again with good heart, and hopes that he may yet succeed; but in the business of this mortal life, if you are found bankrupt, you are bankrupt for ever and ever. I do therefore charge you, by the living God, before whom I stand and before whom I may have to give an account of this day’s preaching ere another sun shall shine, I charge you to see to your own salvation.

We talked about the fate of the unbeliever if they reject the Gospel, and used this to drive our prayers towards seeking them out and giving them the words of eternal life so that they may be saved.

It dawned beautiful in the Hutt, although a little chilly. 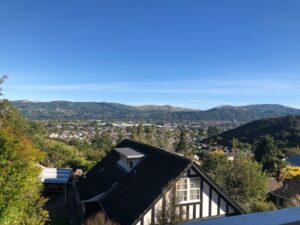 There was no market on today, but there were plenty of people coming and going to keep us busy. Lots were partaking of my $1m Gospel tracts. Not many wanted to stop and talk, but most were appreciative of the tracts, and said they would read them. I prayed they would, as they contain the words of eternal life!

When I arrived, Peck was already in conversation with one of the local residents. She spoke to him for nearly an hour! 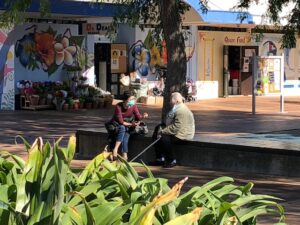 I only had a few conversations of note:

Natasha: I offered her a tract. She took it, but she looked annoyed. I asked her if she ever thought about the afterlife. She said yes, but I could feel her trying to walk away. I asked where her afterlife will be. She said with all her family in heaven. I asked her if she thought she was good enough to make it herself. She thought so, so I tested her with the law. She fell way short , and that just caused her snarky demeanour to get worse. I asked her if these were some of the things you would be judged on, would you be innocent or guilty? Guilty. Heaven or hell? Hell – but no, God is forgiving isn’t he? I explained the courtroom analogy, a good judge wouldn’t just forgive her for her crimes and let her off. She mumbled. I told her the only way she could get off her going to hell would be if someone else paid her hell punishment for her. She rolled her eyes and said you’re talking about Jesus, aren’t you? I said yes, but do you know why He did what He did? She said to tell her, so I told her that if you are guilty of a crime and a fine needs to be paid, someone else can pay the fine for you. It is legal. It doesn’t make you innocent, but legally, you are allowed to go. That’s what Jesus did for you. You broke God’s law, and Jesus paid the fine in His life’s blood. But it doesn’t mean anything unless you repent (turn from your sinning), and transfer your trust from your own goodness (which we’ve discovered you don’t have), into trust in Jesus, because He paid it all for you. Does that make sense? She said it did. I asked her when she was going to do that, and she said she would think about it. I asked her when she was going to die. She said she didn’t know. I said if you died now, where would you go? She said Hell. Then I asked her if it made sense to get right as soon as possible before death? She said probably. I thanked her for letting me talk, and gave her a good person tract. I’m not sure if it caused her to make any changes, but at least now she knows the truth!

Riley and his ‘gang’: I was walking towards the old Post Office, and noticed Peck talking to some young teens. They were swearing like troopers. They acted like they couldn’t give a toss about what anyone did or said. I put myself between one of them who was riding a bike and Peck. I asked them if it was OK to talk like they were. One said it was cool. I asked him what would happen if his grandfather caught him talking like that, and he told me he would kick his <expletive>. I asked him why did he feel it was OK to talk to a woman like that. He just shrugged and said it felt cool. I asked them if they wanted to know what the lady was going to talk to them about. They said OK, so I rounded them up, about 5 in all, and gave them million dollar tracts. They thought they were cool. I asked them if they had any thoughts about what happens after death. The mouthy one on the bike said he was going to hell because he had done bad things. I asked what sort of bad things. He said stealing, and steering people towards his father to by drugs off him. He asked if I wanted to buy some. I quietly declined. He said his dad was in a gang (can’t remember which one), and he wanted to be just like him. Then he rode off. There were three of them left attention, sitting on a ledge, so I decided to ignore the others, and focus on them. I asked one of them his name, and he said it was Riley. I said he didn’t look like the type of kid to hang around with gang types. He said it just felt cool. Then I asked him if he thought he would make it to heaven after he died. He said he didn’t know, maybe. I took him through the law. He admitted to lying, shoplifting, and blasphemy. I asked him if this was something he would be judged on, would he be let into heaven? Probably not. Then where would you go? Probably hell. I asked if it concerned him. But then the cool demeanour kicked in and said it would be cool, with all the rock music and partying. I told him some home truths about hell, and he said ‘Oh’. By this time the other two kids had snuck away. I took him through the Gospel. Riley’s ‘cool attitude dropped away, as there was no one to impress. He was very thoughtful, so I prayed that the seed of the Gospel would germinate and take root. I managed to give most of them good person tracts to read.
Later on, I heard some yelling coming out of one of the shops. The kid on the bike came cycling out of the shop, with the owners yelling at him. He was yelling back obscenities. I managed to stop him and ask what he was doing. He was calling the shop owners names and said they were idiots. I told him on no uncertain terms that if he didn’t turn his life around soon, he would be on a very slippery slope to some dark places. I also re-iterated that unless he repented of his sinning, and placed his faith in Christ, he would spend eternity in hell. He said ‘cool, coz’ that’s where I want to go!’. May the Lord be patient with His justice towards him!

I bumped into a lot of Christians today as well, and they all thanked me for doing what I was doing. It is good to receive encouragement for doing the Lord’s work!

Once again, it was an excellent outreach. The Lord is truly pointing us to the right people, so that we can point them towards Him, for His glory alone!
Blessings
Craig.