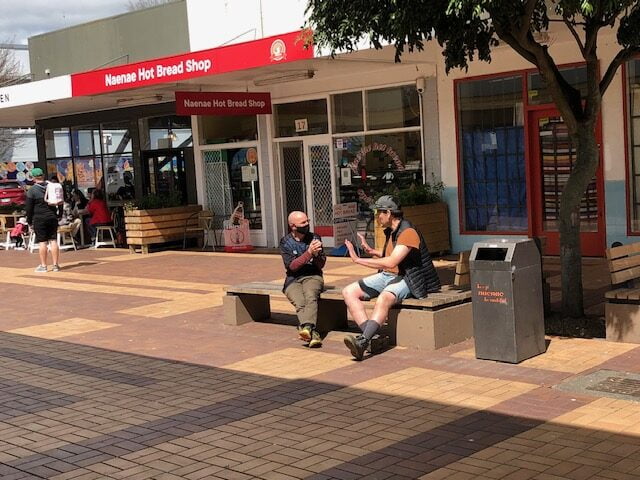 For those that were expecting a report after our last outing – we were in Level 3 Lockdown, and the Naenae Market was not operating. So we used the time doing a letterbox drop with tracts, and fliers about the children’s holiday programme the following week.

“Finally, my brethren, be strong in the Lord and in the power of His might. Put on the whole armor of God, that you may be able to stand against the wiles of the devil. For we do not wrestle against flesh and blood, but against principalities, against powers, against the rulers of the darkness of this age, against spiritual hosts of wickedness in the heavenly places. Therefore take up the whole armor of God, that you may be able to withstand in the evil day, and having done all, to stand. Stand therefore, having girded your waist with truth, having put on the breastplate of righteousness, and having shod your feet with the preparation of the gospel of peace; above all, taking the shield of faith with which you will be able to quench all the fiery darts of the wicked one. And take the helmet of salvation, and the sword of the Spirit, which is the word of God; praying always with all prayer and supplication in the Spirit, being watchful to this end with all perseverance and supplication for all the saints—and for me, that utterance may be given to me, that I may open my mouth boldly to make known the mystery of the gospel, for which I am an ambassador in chains; that in it I may speak boldly, as I ought to speak.“

We talked about the necessity to have the full armour of God on when we are out witnessing, for, as the passage says, we are fighting against principalities and powers.

We prayed for Gospel boldness as we approach people, and love that we might tell them the truth.

When we arrived at the shops, it was very busy. Today was “Super Saturday”, or “Vaxathon” Day – a Government incentive to get everyone vaccinated with the Pfizer vaccine. There was a vaccination centre set up in one of the vacant shops, and a free BBQ with live music. I felt I might be able to use this to springboard to the Gospel.

I fell into some easy conversations, and here are some of them:

Coralie: She happily took the million dollar tract off me. Once I asked her what the million dollar question was, she relaxed, and said she goes to church (she did tell me the church she attended). So I asked her where she will go when she dies. She said heaven. I asked her why. She said because she goes to church and prays. This set off alarm bells for me! I asked her that when she stood before God on judgement day, and He asked her why He should let her into heaven, what would she say? She said that because Jesus had changed her life, and that she was a good person  (even though she was smoking and using expletives). I asked her if she had ever lied, stolen, or blasphemed. She admitted she had done all three. I asked her if these were some of the things she would be judged for, would she be innocent or guilty? She said guilty, but Jesus had forgiven her. I asked her on a scale of 1 to 100, how certain was she that she would be in heaven? She said fairly certain. A Christian should have 100% certainty, so I asked her if she sinned, and then died straight after, would she go to heaven or hell? She said she didn’t know. I asked her how much of her hell punishment did Christ take for her? She said probably all, so I asked  if Jesus took all of her hell punishment, how much is left for her to pay? She didn’t know. The conversation was going in circles, and she was starting to get a bit ticked off with me. So I gave her the Gospel in clear, precise format, to avoid any more confusion on her part, and gave her a good person tract. We parted on a handshake. I prayed that something I shared would spark something in her heart. 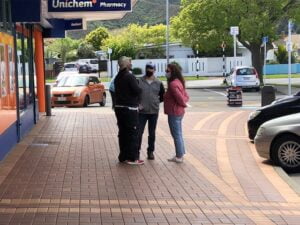 Peter: When this gentleman saw me, he seemed resigned to the fact that I would approach him, so he stopped right in front of me. He took a million dollar tract and laughed. I asked him what happens after we die? He told me he had died from a heart attack, and been resuscitated. Then he said he had another one – this time he was unconscious for three days before anyone found him! So I asked him if he did not survive the next one, what would he say to God on Judgement Day to get into heaven? He said “that’s a great question!” He said that because he went to church and read his Bible, he would be let in. He told me what church it was, and surprisingly, it turned out to be the same one Coralie attended. I thought to myself “oh, no!”. I asked Peter what about all the wrong things you have done in your life – what happens to them? He said that Jesus had forgiven them. I asked him if he was born again, but he didn’t know what that meant. So I went through the law with him. He said yes to lying, stealing, and adultery, but he didn’t realise they were the things that God would judge him for. I never thought it at the time, but in a way I was using the defibrillator of the law to shock his dead, sinful heart back to life – just like the one they used on him when he was unconscious. Now knowing the sins he would have to give an account for, I asked him if he would be found innocent or guilty. He thought about it for a while and then said “guilty”. “Heaven or hell?” “I hate to say it, but probably hell”. I asked him if it concerned him. He said “yeah, but I can be forgiven, right?”. I told him that the only way for him to not go to hell was if someone else took his hell punishment for him. How should he feel towards that person? He said “very grateful”. I said the Christian life isn’t where you get to do what you want, then ask God to forgive you for it. That would make you a hypocrite, and a false convert. I went on to give Peter the true Gospel of grace and mercy won by Jesus on the cross. Peter was left somewhat speechless after this. I said that he needed to place his faith in Christ, as next time he had a heart attack he might not recover from it. He said that I had given him something to think about. I gave him a good person tract, as well as one of our church cards. As I was shaking his hand, I said that if the church he attended didn’t tell him any of this, then he should think about finding one that did. When we parted, I prayed that God would convict the leaders of that church to repent and tell the truth!

Chad: Chad was standing in a hi-viz vest, facing the vaccination centre. The label on his lapel read ‘Maori Warden’. He was keeping an eye on things outside the centre. He laughed at the million dollar tract. I asked him what happens after death. He said “We go to heaven”. I asked if everyone goes, and he said yes. I asked what about the bad people, do they go to heaven too? He said no, they go somewhere else. I asked if he was good enough to go to heaven, and of course he said “Yes!”. He said he was going to a group that teaches about God, and church things. I asked him if he wanted to take a test to see how good he was. He said “OK”, but I could see he had to keep his eyes peeled as well. He admitted to lying, stealing and blasphemy, and said that he didn’t know if that would stop him getting to heaven, because he was still learning about these things. I asked Chad if those things he admitted to were criteria in getting to heaven, would he make it? He said he didn’t know, so I used the judge / criminal analogy to show that he couldn’t get off his crimes. At this point, Chad began to feign a distraction to his job. I could tell he was squirming by what I was saying, but was suspicious that he was making out that he had to keep focused on his work. I short-cutted the conversation by saying that his group should have been giving him the real Gospel, and gave the Gospel to him, warts and all. He thanked me, and took a good person test tract. I don’t know if I got through to Chad, but prayed that a seed was sown. 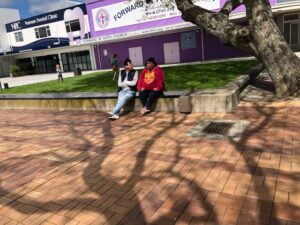 We did pray for confidence during our earlier prayer time. However, Mike was the only one brave enough to slip a Gospel tract to Minister Chris Hipkins, who is NZ’s COVID Minister, and also our local Member of Parliament (Remutaka). MP’s were out and about around the country today, to increase the uptake of the COVID vaccine. Mike said that he graciously accepted the tract, and did promise to read it. We need to remember that although we may place importance on others, that everyone has to give an account to God on Judgement Day, regardless of whether they believe in Him or not. As with all people, we pray that they come to believe the Gospel, and place their faith in Christ!